Only 2 weeks ago the Colorado House passed H.B. 1274, a bill which would repeal the death penalty and use the savings to solve homicide cold cases, by a single vote. Foes of the bill in the Senate stripped out the death penalty repeal provisions and added an alternative source of funding to satisfy those who support additional cold case spending: a $2.50 surcharge on individuals convicted of a crime. According to The Denver Post, the rewrite happened a full 15 minutes before the Senate was scheduled to vote and with only a few days left in the current legislative session.

The Denver Post article goes on to explain how the rewrite puts the death penalty repeal in doubt:

Sponsor Sen. Morgan Carroll, D-Aurora, blamed the amendment on some colleagues’ anxieties over the controversial topic of repealing the death penalty and said the maneuver leaves little time to work out compromises and no time for public hearings or fiscal analysis of the new draft.

“Some people are looking for ways to avoid voting on the core issue,” Carroll said. “This is a totally different bill that’s not had a public hearing. It’s gamesmanship that makes a mess of public policy.”

Carroll had the backing of a broad coalition of groups — including the families of victims of unsolved murders, whose painful stories helped push the idea that ending the death penalty could be used as a funding source for cold-case investigations.

With their needs potentially met, however, the remaining death-penalty foes in the coalition could lose one of their most poignant and persuasive voices.

I think Sen. Carroll is mostly right. Her colleagues in the Senate are probably thinking more about the 2010 election than any principle regarding the death penalty. With the rewritten provisions to fund the cold case unit and taking the death penalty off the table, her friends in the Senate can avoid making a controversial vote and not have to worry about angering voters.

I’m sure that Gov. Bill Ritter (D) who is also up for re-election in 2010 is most relieved of all about these developments. So far, Gov. Ritter has managed to remain on the fence on the issue with his finger firmly in the air to determine which way the political winds are blowing. Perhaps the only clue as to where he stands – when Ritter was the Denver D.A. he unsuccessfully pursued the death penalty in 7 cases.

Perhaps the “limited resources” and economic arguments was not the best strategy to pursue after all. While these are, in my view, persuasive arguments they should be secondary considerations to the real moral and legal question: should the state have the right to kill? This is the question that far too many politicians do not have the courage to answer.

Carroll said there is too great a risk of wrongful conviction to chance an irreversible penalty such as death.

“How many colleagues do we have in the Senate who believe the state or the government is infallible?” she asked.

As I have written on many occasions, infallible the government is not. This is especially true for our broken criminal justice system.

Colorado One Step Closer to Abolishing the Death Penalty 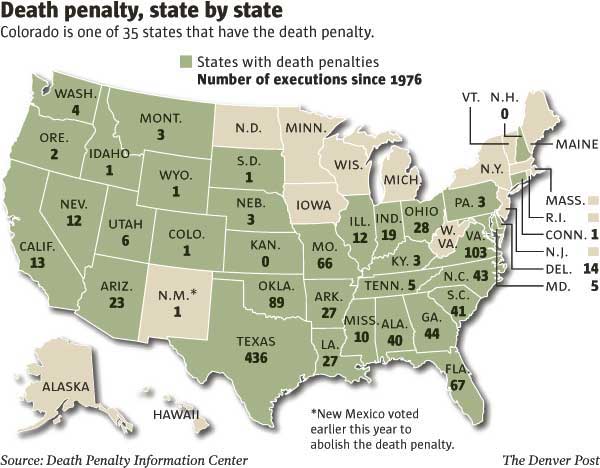 The Colorado House passed the bill which would eliminate the death penalty by 1 vote.

In the hushed state House chamber, all eyes Tuesday stared up at the vote board, which showed lawmakers deadlocked 32-32 on whether to repeal the death penalty in Colorado.

All but Rep. Edward Vigil’s eyes, that is.

The Fort Garland Democrat sat at his desk with a hand held to his forehead, contemplating his suddenly crucial decision.

After nearly a minute, Vigil pushed a green button and, in doing so, pushed House Bill 1274 on to the state Senate in a dramatic 33-32 victory for death-penalty foes at the Capitol.

“Hopefully this will make us a better society in Colorado by not having a death penalty,” Vigil said afterward, “though I have my reservations.”

The bill would eliminate the death penalty as a sentencing option going forward and would use the projected cost savings to fund a cold-case unit in the Colorado Bureau of Investigation.

Only 1 Republican voted in favor of repealing the death penalty on pro life grounds: Rep. Don Marostica of Loveland.

As evident from the article, Coloradans are very divided on the question of the death penalty, despite the fact that only 1 person has been executed in Colorado since 1976. How the vote will go down in the Senate and whether or not former prosecutor Gov. Bill Ritter (D) will sign the bill into law is anyone’s guess.

It’s my hope that Colorado will ultimately make the right decision and follow New Mexico’s lead.

Quote of the Day II: Gov. Bill Richardson on the Death Penalty

“Regardless of my personal opinion about the death penalty, I do not have confidence in the criminal justice system as it currently operates to be the final arbiter when it comes to who lives and who dies for their crime,” Richardson said in a statement Wednesday.

He noted that more than 130 death row inmates have been exonerated in the past 10 years, including four in New Mexico.

For reasons I have expressed in earlier posts, I am opposed to the death penalty. I simply do not trust our criminal justice system enough to make a life or death decision on the innocence or guilt of an individual (based on recent news concerning Dr. West and others, it seems my distrust in the system is completely justified). I am very pleased to learn that the Colorado General Assembly is taking a hard look at this issue and considering repealing the death penalty and using the money saved to help investigate cold cases.

The idea of abolishing the death penalty in Colorado and using the money it takes to prosecute such cases to solve so-called cold cases stirred debate in a House committee late into the night Monday.

House Majority Leader Paul Weissmann, D-Louisville, revived his bill that just missed passing the House in 2007. The threat of death does not deter people from committing murders, he said, and the $370,000 spent to prosecute those cases could be better spent on investigating unsolved murders.
Since 1967, Colorado has executed one person and there are only two people on death row, Weissmann said. During that time, there have been 1,435 unsolved homicides.

Considering that the death penalty is so rarely enforced in Colorado, it seems to me that even those who support the death penalty should recognize the incredible costs associated with placing less than a handful of individuals on death row. The families of these 1,435 victims have just as much right to bring the killers of their loved ones to justice as those who wait for the day of execution for the ones who have taken their loved ones from them.

But several opponents of Weissmann’s bill said it’s based on a false argument.

Attorney General John Suthers noted that the Homicide Assistance Unit that works to solve and prosecute death penalty cases also has assisted 19 of the state’s 22 judicial districts with cold cases.

Colorado Bureau of Investigation Director Ron Sloan said that a Cold Case Task Force formed in 2007 is nearing the point where it will bring together federal, state and local analysts to review cases that are referred to it.

Plus, Suthers said, there are times when the possibility of receiving the death penalty is necessary to deter crimes. Those include instances in which someone who has been sentenced to or is facing life in prison might want to kill witnesses or commit an act of terrorism, he said.

I disagree that the bill makes a “false argument.” If the state saves $370,000 by no longer prosecuting death penalty cases, that’s $370,000 the cold case units have to work with that they currently do not. And if Colorado has only executed one person since 1967, how does having the death penalty on the books deter individuals from committing homicide?

I think we all instinctively know the answer: it doesn’t.

Over at Reason, Radley Balko has published a damning article and video of Dr Michael West attempting to murder a man named Jimmie Duncan.

In 1993,  [Dr Michael West and Dr Steven Hayne]  conducted an examination on a 23-month-old girl named Haley Oliveaux of West Monroe, Louisiana, who had drowned in her bathtub. The video shows bite marks mysteriously appearing on the toddler’s face during the time she was in the custody of Hayne and West. It then shows West repeatedly and methodically pressing and scraping a dental mold of a man’s teeth on the dead girl’s skin. Forensic scientists who have viewed the footage say the video reveals not only medical malpractice, but criminal evidence tampering.

The dental mold came from the teeth of the man babysitting the girl at the time of her death.  The manufactured bite-mark evidence put the man, Jimmie Duncan on death row.  I am convinced that Mr Duncan, who was described by witnesses as being very remorseful and in hysterics with shame, was guilty of negligent manslaughter.  Nowhere in the United States are people executed for manslaughter through negligence.  In his attempt to make him look more depraved than he actually is, by attempting to send him to the death chamber without justification, Dr West was attempting to murder Jimmie Duncan, as surely as if he had booby-trapped Duncan’s car with a bomb connected to the ignition system.

This might seem like an isolated incident, except for the fact that Dr Hayne has conducted nearly every autopsy of crime victims performed in the state of Mississippi in the past 20 years.  In cases where Dr Hayne could not find evidence to help convict criminals, he frequently sent the bodies to Dr West, who had a special test for bite-marks that has never been reproduced by any other forensic specialist.  And, like any monopoly, the monopoly criminal apprehension organization operated by the Mississippi state government refuses to revisit all the cases affected by these men’s testimony.

Given the thousands of people that Hayne and West helped put behind bars, there is a near certainty that many innocent people have been sent to jail for crimes committed by others.  One could argue that that amounts merely to malpractice.  However, the last time I checked, when one person tampers with a crime scene for the purpose of framing an innocent man with a crime while obsucring the actual guilty party’s role, it is called being “An accessory to murder after the fact”

I strongly encourage our readers in Mississipi to question the news media and government officials regarding the destructive trail of injustice left by Dr’s West and Hayne.  Their victims cry out for justice.

tarran
I am an anarcho-capitalist living just west of Boston Massachussetts. I am married, have two children, and am trying to start my own computer consulting company.
http://www.thelibertypapers.org/author/tarran/
michael west, mississipi forensics
« 1 … 7 8 9 10 »