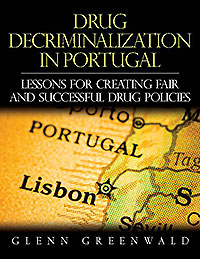 In July of 2001, Portugal tried something which would horrify policy makers the world over: the decriminalization of all drugs. As a result, Portugal turned into a country overrun with drugs, stoners, drug tourists, and criminals…right?

Not according to a report by Cato’s Glenn Greenwald entitled Drug Decriminalization in Portugal: Lessons for Creating Fair and Successful Drug Policies. Greenwald concludes:

“The data show that, judged by virtually every metric, the Portuguese decriminalization framework has been a resounding success. Within this success lie self-evident lessons that should guide drug policy debates around the world.”

While this result may shock most people, this comes as no surprise to Libertarians. The question is, will the rest of the world learn from Portugal’s experiment with drug decriminalization?

More Information on this report:

I’m not going to make it to any Tea Parties today, because frankly I think my personal time is far better spent earning money at my job than engaging in a bit of populism that will likely be forgotten and ignored by the mainstream media — at least those portions of the MSM that don’t actively deride the movement.

But in the wake of this, and of the recent DHS report, I thought a little picture was in order:

My office when I worked from home: 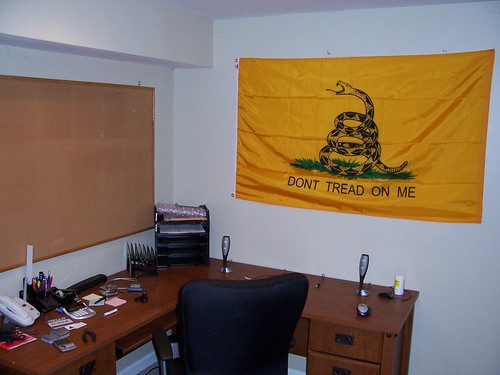 Some might call it extremism. I call it inspiration. Does that mean my name will end up on a list somewhere (if it hasn’t already)?

This seems even excessive for the Most Authoritarian Sheriff in America, Joe Arpaio:

Sheriff’s deputies and county Protective Service officers arrested two men and two women in the middle of the [County Board of Supervisors] meeting when they stood and applauded a speaker who criticized Arpaio.

Odhner is a member of the anti-Arpaio group Maricopa Citizens for Safety and Accountability, said the group’s director Raquel Terán. Nelson, Sanschafer and Theilen are members of the Association of Community Organizations for Reform Now. The trio frequently has participated with MCSA members during the group’s anti-Arpaio campaign.

The crackdown brought the anti-Arpaio activist arrest tally to nine in the past four months.

Here’s the video of the incident:

But perhaps the disorderly conduct charges are legit. After all, public meetings have to have order right?

One might be able to accept this explanation until considering this:

A double standard clearly was in effect during the Board of Supervisors meeting Wednesday. At one point, public-transit advocate Blue Crowley used part of his public-comment time allotment to sing a birthday song to Kunasek. Kunasek blushed and several people applauded, but none was ordered to leave or threatened with arrest.

However, Kunasek, deputies and security officers refused to tolerate applause after the anti-Arpaio speech minutes later.

Don’t expect any apologies from Sheriff Arpaio for the actions of his deputies. He is THE LAW!

Are you an enemy of the state? Chances are if you are reading The Liberty Papers, you are! According to a new report from the Missouri Information Analysis Center, “The Modern Militia Movement” authored by Governor Nixon and Attorney General Koster, signs that you may be a domestic terrorist or militia member include:

– You supported Ron Paul or 3rd party candidates such as Chuck Baldwin or Bob Barr in the 2008 election (Guilty!)

– You have “anti-government,” Campaign for Liberty, Gadsden Flag, and “libertarian” bumper stickers on his or her vehicle or possess other related literature (Guilty!)

-Those who write about or talk about the coming economic collapse of the U.S. (Guilty!)

Basically, anyone who distrusts the state on any level could be profiled as a potential militia member, domestic terrorist, or enemy of the state.

I first learned of this report from the video clip below (Glenn Beck with Penn Jillete as his guest).

So what does Chuck Baldwin, Bob Barr, and Ron Paul think about being associated with domestic terrorism?

Can you imagine the fallout of this preposterous report had the names Jesse Jackson, Al Sharpton, and Maxine Waters been used instead of the names Ron Paul, Chuck Baldwin, and Bob Barr?

Bob Barr seems to be content with the response he co-wrote with Baldwin and Paul, at least for now (I haven’t found any response so far from Barr other than the aforementioned letter)

Ron Paul’s Campaign for Liberty, however; is not taking this laying down and is circulating a Citizen’s Petition for Redress of Grievance

Both Ron Paul and Campaign for Liberty champion principles of freedom, peace, and prosperity. We believe that the Founder’s vision for America can be reclaimed through education and peaceful activism.

Simply supporting the Constitution does not make you worthy of a watch list; it makes you a Patriot.

I find it interesting that some (mostly Democrats) who when Bush was president said that dissent was patriotic now get nervous when anyone dares to question the policies of “The Messiah” a.k.a. “The Chosen One” a.k.a. President Obama. To be against this enlightened being is to commit heresy and obviously should be considered a wild-eyed, dangerous enemy of the state.

Well, believe it or not, not everyone believes that the direction Obama and the Democrat controlled federal government are in the best interest of those who value the rights of life, liberty, and property. The State has become an enemy to these very basic human rights.

Does this make me an enemy of the state? Well, I certainly wouldn’t describe myself as a “friend of the state.”

To those of you who have my name on a watch list and reading this, you can take that statement however you like.

Don’t Tread on Me!

A Visitor From the Past

Speaking of freedom-loving hotties, I just received this YouTube from Michele Seven: