The rEVOLution After Paul

With Congressman Ron Paul’s third presidential run and career coming to an end, what will become of his rEVOLution he inspired? Prior to the 2012 campaign, some suggested that former New Mexico Gov. Gary Johnson would be the “next” Ron Paul but with Johnson running as the Libertarian Party nominee after being mistreated by the GOP establishment in the primaries, it appears to me that that bridge has been burned and will likely never be rebuilt. Johnson’s activities in furthering the liberty movement will be done outside the Republican Party. 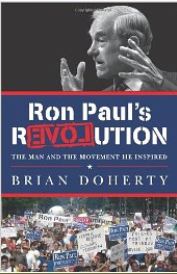 The new heir apparent to lead the rEVOLution appears to be the congressman’s son Sen. Rand Paul. Rand Paul has been one of a handful of voices of reason in the senate voting against renewing the Patriot Act, the NDAA*, standing up to the TSA, and speaking out against President Obama’s unconstitutional “kinetic military actions” in Libya and elsewhere to name a few. For the most part**, Sen. Rand Paul has been a consistent champion of liberty much like his father. Speculation abounds that Sen. Paul will make a presidential run of his own in 2016.

The rEVOLution and the greater liberty movement must be much larger than one person***, however. According to Brian Doherty, author of his new book Ron Paul’s rEVOLution: The Man and the Movement He Inspired, Paul’s movement will continue long after Paul himself has left the political stage. Doherty summarizes the thesis of his book in the Cato forum (video below); David Boaz and Sen. Rand Paul also offer their thoughts on the future of the liberty movement after Ron Paul.

END_OF_DOCUMENT_TOKEN_TO_BE_REPLACED

Open Thread: If I Wanted America to Fail…

FreeMarketAmerica.org has released a great video (above) called “If I Wanted America to Fail.” It’s a pretty decent list of policies one would want to implement to cause America to fail but it’s far from complete.

Here are a few suggestions of my own:

If I wanted America to fail, I would want congress to abdicate its war powers and give those powers to the president so he could commit acts of war against any country he desires for any or no reason at all.

If I wanted America to fail, I would want these undeclared wars to be open-ended with no discernable war aim. This would lead to blowback and create more enemies for America.

If I wanted America to fail, I would have troops deployed around the world to make sure the world is “safe for democracy” but would topple regimes, even those elected by the people of these countries, if the president found the new leaders not to his liking. This would create even more enemies who would try to cause America to fail.

If I wanted America to fail, I would do away with due process – even for American citizens who the president considers “enemy combatants.” I would want the president to have the ability to detain these people indefinitely, ship them to a foreign country, and even give the president the authority to kill these people anywhere in the world they are found.

If I wanted America to fail, I would have the ATF sell arms to Mexican drug cartels so they could kill innocent people on both sides of the border. I would name this operation after a lame action movie franchise and pretend to know nothing about it when details were made public (It’s not like the media would have any interest in investigating this deadly policy because this is a Democrat administration).

Now it’s your turn. What are the policies being implemented now that you would want implemented if your goal was to make America fail?

Jon Stewart as a Voice of Sanity on Iran

The war drums for war with Iran on behalf of Israel are getting louder by the day. I wouldn’t have ever imagined that after experiencing the failure to find WMD in Iraq following the invasion along with the tremendous sacrifices of blood and treasure we would be having an almost identical conversation concerning Iran years later. I thought that as a country we learned the hard lessons about the folly of preemptive war.

Apparently, I was wrong.

The prospects of a nuclear Iran has been an issue I’ve been intending on writing about. What does it mean for the security of the world if Iran gets the bomb? Is war with Iran even avoidable given all the heated rhetoric on all sides?

Now enter a voice of reason: comedian Jon Stewart. One thing that Stewart points out in the first clip is that this is an election year, not only for the U.S. but also Israel and Iran! Could it be that the rhetoric is so over the top because politicians in all three countries want to talk tough to curry favor with voters?

In the second clip, Stewart plays even more rhetoric from the 2012 campaign. The leading G.O.P. candidates would have us believe that President Obama has said and done nothing whatsoever to help Israel stop Iran from getting the bomb. As Stewart demonstrates here, Obama’s rhetoric doesn’t differ that much from the G.O.P. field (sans Ron Paul, of course). President Obama’s rhetoric is much more hawkish than I am comfortable with to be sure.

While Stewart’s comic relief on this issue is very much needed, hopefully he gets his very serious message across.

If someone were to pose the question: “Among the candidates running for president, who would you say describes himself as the most ‘pro-family’?”

I suspect that most people would say Rick Santorum and for good reason. To Santorum, the decline of the traditional, nuclear family is the root cause for every problem facing America right now. Even (perhaps especially) individual rights take a back seat to his family values.

While I obviously disagree with this view, I don’t think there is any question that children have a better chance of becoming productive, successful adults when they grow up in a healthy and loving family environment than those who do not. Whether such an environment requires both a father and mother is subject to debate (and maybe a topic for another time).

With the premise that Rick Santorum is the great defender of the family in mind, a member of Students for Sensible Drug Policy (SSDP) asked the former senator a very good question as he was wading through the crowd shaking hands:

“As a champion of family values and keeping America strong, would you continue to destroy families by sending nonviolent drug offenders to prison?”

To which Santorum responds:

“Uh…wow…the federal government doesn’t do that.”

Jacob Sullum’s response is right on:

“That will come as a surprise to the nearly 100,000 drug offenders in federal prison, who account for almost half of all inmates. (Another 400,000 or so are in state prisons and local jails.) Does Santorum think only violent drug offenders go to federal prison? There is no such requirement.”

Perhaps Santorum should take a moment to visit someone from Families Against Mandatory Minimums (FAMM) and find out if tougher federal drug laws are destroying families.

This is a perfect opening for the Ron Paul campaign to point this out to his rival who is obviously clueless on this issue. Between Rick Santorum’s continued support for the war on (some) drugs and his eagerness to start up a war* with Iran we cannot afford, I think it’s time to question his pro-family bona fides.

END_OF_DOCUMENT_TOKEN_TO_BE_REPLACED

Until Rick Santorum’s recent surge in the polls, I didn’t consider him much more than a nuisance. Since the beginning of the campaign, I thought he had the most anti-libertarian agenda in the 2012 race but I didn’t think he was as realistic of a threat as say Rick Perry or Newt Gingrich. The best way to approach Santorum was to ignore him and not give him the attention he desperately craved.

But since Santorum is polling in the top three in Iowa, I think it’s time use his own words to illustrate why he is the most anti-liberty candidate in the race. He actually makes Barack Obama look like a civil libertarian (which is quite an accomplishment).

First, in this interview, Santorum says (among other things) that the pursuit of happiness somehow harms America.

Then, David Boaz writing for Cato@Liberty shares this quote from Santorum taken from a 2006 interview on NPR:

One of the criticisms I make is to what I refer to as more of a libertarianish right. You know, the left has gone so far left and the right in some respects has gone so far right that they touch each other. They come around in the circle. This whole idea of personal autonomy, well I don’t think most conservatives hold that point of view. Some do. They have this idea that people should be left alone, be able to do whatever they want to do, government should keep our taxes down and keep our regulations low, that we shouldn’t get involved in the bedroom, we shouldn’t get involved in cultural issues. You know, people should do whatever they want. Well, that is not how traditional conservatives view the world and I think most conservatives understand that individuals can’t go it alone. That there is no such society that I am aware of, where we’ve had radical individualism and that it succeeds as a culture.

Silly me. I thought the American Revolution and this grand experiment in republican constitutional governance was precisely about “radical individualism” and liberty. To the extent our society hasn’t succeeded is due in large part to moralistic busy bodies just like Rick Santorum.

As if meddling in the affairs of Americans were not enough, Santorum also wants to continue to meddle in the Middle East and elsewhere. Santorum told “Meet the Press” that he would bomb Iran via airstrikes if Iran failed to allow inspectors verify that the regime isn’t developing a nuclear weapon (essentially, Iran is guilty of developing a bomb until proven innocent). “Iran will not get a nuclear weapon under my watch” Santorum proclaimed.

It seems that Rick Santorum inhabits another planet from those of us who believe in liberty, small government, and a humble foreign policy. This might explain why in the debates Santorum has the look of bewilderment on his face when Ron Paul speaks (in a foreign language apparently) about common sense principles of life, liberty, and property.

If the idea of a President Santorum doesn’t frighten you, it should.