Sorry, Donald. Cruz and Rubio are BOTH Eligible for President 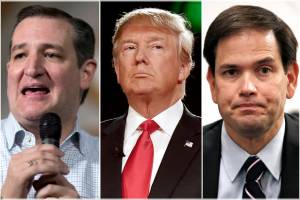 If I had a dollar for every time I heard someone say that Ted Cruz and Marco Rubio are ineligible to run for president because they are not “natural-born citizens,” I would have more money than the recent $1.5 Billion Powerball winners. Donald Trump is wrong. The Constitution and case law are clear. Both Ted Cruz and Marco Rubio are natural-born citizens, and therefore eligible to run for president.

Article II, Section 1 of the Constitution makes it clear that only a natural-born citizen, who is at least 35 years old, is eligible to be president:

Ted Cruz was born December 22, 1970 in Calgary, Alberta, Canada. His father, Rafael Cruz, was born in Cuba and his mother, Eleanor Wilson, was born in Wilmington, Delaware. The family relocated to Texas in 1974.

Most legal scholars agree that a natural-born citizen is one who does not need to go through the naturalization process. The Naturalization Act of 1790 addresses the issue of children born outside our borders to American citizens:

Many birthers, such as Ann Coulter, make the argument that at the time the Naturalization Act of 1790 was passed, citizenship only passed through the father, requiring that the father must be a U.S. Citizen. While this is true, they hold the false belief that the Constitution has not been amended to change this. At the time of the signing of the Act, women also could not own property without her husband. Since it is not mentioned or amended in the Constitution, I hope that Coulter is prepared to forfeit her property she owns on her own since that is her interpretation of the Constitution. But I digress. Furthermore, the definition of a natural-born citizen was later codified at 8 U.S.C. 1401(d). It reads in pertinent part:

Since Ted Cruz’s mother is a natural-born citizen, Ted Cruz is also a natural born citizen. It does not matter that he was born in Canada. The Supreme Court has also answered this question. In Rogers v. Bellei, 401 U.S. 815 (1971), the Court held that the federal government may revoke the citizenship of a natural-born citizen if certain requirements were not met. In this case, Aldo Mario Bellei was born in Italy to an American mother and an Italian father. Mr. Bellei held both Italian and U.S. citizenship.

Presidential candidate, Donald Trump recently stated that he is unsure that Marco Rubio is eligible to run for president. The case for Rubio’s citizenship is more clear-cut than the case for Cruz. Marco Rubio was born on May 28, 1971 in Miami, FL. His parents came to the United States in 1956. At the time of Rubio’s birth, his parents were Permanent Residents of the United States. This means that his parents were here legally with their “green cards.” Federal law is clear that those born on U.S. soil and subject to the jurisdiction of the United States are natural-born citizens. 8 U.S.C. 1401(a) reads in pertinent part:

(a) a person born in the United States, and subject to the jurisdiction thereof.

Of course, the 14th Amendment sec. 1 provides that:

Since Marco Rubio was born on American soil (last time I checked, Miami is still American soil), and he is subject to the jurisdiction of the United States, he is clearly a natural-born citizen.
The Supreme Court has also ruled on this. In U.S. v. Wong Kim Ark, 169 U.S. 649 (1898), the Court held that a child born on U.S. soil to permanent residents of the United States is a natural-born citizen by virtue of the 14th Amendment. Justice Horace Gray, citing to U.S. v. Rhodes (1866), stated in his majority opinion that:

Conclusion
The fact that Donald Trump and other birthers would raise questions as to the eligibility of either Ted Cruz or Marco Rubio to run for president is absolutely absurd. Any litigation of these issues is frivolous and a waste of taxpayer money. It is this lawyer’s belief that anyone who brings such a frivolous suit should be sanctioned and responsible for government attorney fees. Enough is enough. It is time to put the birther argument to rest.
Albert Northrup
Albert is a licensed attorney and holds a J.D. from Barry University School of Law as well as an MBA and BA in Political Science from The University of Central Florida. He is a conservative libertarian and his interests include judicial politics, criminal procedure, and elections. He has one son named Albert and a black lab puppy named Lincoln. In his spare time, he plays and coaches soccer.
14th Amendment, Birther, Donald Trump, Election 2016, GOP Primary, marco rubio, Ted Cruz