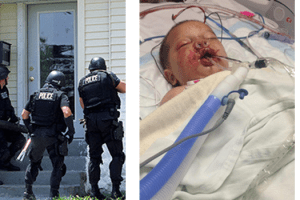 On May 28th, 2014 around 3:00 a.m. in Habersham County, Georgia a SWAT team raided a house the police believed to be occupied by Wanis Thonetheva, an alleged drug dealer. In the chaos of the raid instead were four children and up to four adults. The youngest of the children, 19 month-old “Bou Bou” Phonesavanh was burned and permanently disfigured from a flash-bang grenade which set the play pen he was sleeping in ablaze.

No drugs or contraband of any kind was found in the home. Also absent from the residence was the man they were looking for.

Bou Bou was taken to Grady Memorial Hospital in Atlanta where he was put into a medically induced coma. Doctors were not sure if the toddler would ever wake up but fortunately, he did.

This is not by any means, the end of the Phonesavanh family’s problems with Bou Bou’s medical expenses around $1.6 million and surgeries into adulthood. These expenses, by the way, that will not be paid by the county or the departments responsible for severely injuring this child.

In the aftermath of this botched SWAT raid, several Georgia legislators are looking to reform the use of “no-knock” raids. Sen. Vincent Fort (D-Atlanta) introduced a bill he’s calling “Bou Bou’s Law” which would require a slightly higher standard for no-knock raids than required by SCOTUS. Bou Bou’s Law would require “the affidavit or testimony supporting such warrant establishes by probable cause that if an officer were to knock and announce identity and purpose before entry, such act of knocking and announcing would likely pose a significant and imminent danger to human life or imminent danger of evidence being destroyed.”

In the House, Rep. Kevin Tanner (R-Dawsonville) introduced a similar bill which would go even further by requiring that no-knock raids be conducted between the hours of 6 a.m. and 10 p.m. unless the judge issuing the warrant “expressly authorizes” another time. Tanner’s bill also requires that each department keep records of each raid which would be compiled with all the other records around the state into an annual report which would be sent to the Governor, Lieutenant Governor, and the Speaker of the House.

While these are laudable reforms which I would hope would pass any state legislature, these reforms do not go nearly far enough. Several of the articles I read in preparing this post had titles like “No Knock Warrants Could be a Thing of the Past.” In reading over these bills, I’m not quite that optimistic. As Jacob Sullum pointed out at Reason, its not at all clear that Bou Bou’s Law would have prevented the raid from happening. The police at the time thought their suspect was probably armed; it probably wouldn’t take much to convince a judge to issue the no-knock warrant.

As I took another look at Rep. Tanner’s bill, I saw no language that would restrict the hours of the standard knock and announce raids. His bill seems incredibly vague to my lay reading “all necessary and reasonable force may be used to effect an entry into any building or property or part thereof to execute such search warrant if, after verbal notice or an attempt in good faith to give verbal notice by the officer directed to execute the same of his or her authority and purpose”.

Its human nature to stretch and bend language in such a way that is favorable to one’s objectives. I can imagine the police “interpreting” this law to mean they could gently knock on the door at 3 a.m., speaking in a barely audible voice “Police, search warrant open up,” counting 1 Mississippi, 2 Mississippi, 3 Mississippi, CRASH!

There is some concern by those who think that even these modest reforms put the police in unnecessary danger – police lives matter. I’m of the opinion that ALL lives matter and propose some (admittedly) radical ideas as to how and when SWAT tactics and/or police searches should be used to protect the life and liberty of all concerned:

– SWAT should not be used at all unless its an active shooter situation, a hostage situation, or credible reason to believe there will be active, armed resistance to the search. Unless there is a very real clear and present danger, leave your military grade toys at the station.

– Each and every police officer involved in the search wears a camera (preferably on the head to have a true POV). All video from the search would be made available to the suspect’s defense attorney.

– The police departments involved are responsible for any and all “collateral damage” to life and property. In the event an innocent life is taken, the individual officer(s) responsible should be treated as anyone else who takes a life. Investigation/prosecution would be conducted by an independent investigators and prosecutors.

– Absolutely no raids or searches of any kind between 9 p.m. and 9 a.m. (though stakeouts and other activity which does not require interaction with the suspect(s) during these hours is permissible).

I’m sure that some if not all of these ideas are too radical for many lawmakers. If we really believe that “all lives matter”, however; these proposals should be thoughtfully considered.

If you would like to make a small donation to help pay Bou Bou’s medical expenses, go to this GoFundMe page which has raised nearly $43k so far.