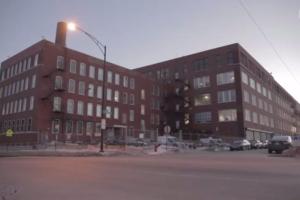 Chicago’s police department is running an “off-the-books interrogation compound” that attorneys liken it to the domestic equivalent of a CIA black site, according to a chilling report from the Guardian’s Spencer Ackerman.

Suspects, like the trio of potheads who wanted to attack Obama’s re-election campaign headquarters with a slingshot and marbles in protest of the NATO summit, are taken to “Homan Square.” But no one is ever booked inside it walls. No public, searchable record of their time there is generated. Neither their families nor their attorneys are informed of their whereabouts. Lawyers attempting to gain access are turned away, even if their clients are in custody inside.

At Homan Square they don’t process paperwork about your arrest. You’re just gone. No one knows.

At some point they have to do the paperwork and prosecute you. After they get your confession, you wind up back in the paperwork.

Suspects allege being beaten, kept in chain link cages, and shackled for extended periods while held inside Homan for as long 24 hours, without access to a lawyer, before being transferred precincts for booking or simply released.

“They just disappear,” said Anthony Hill, a criminal defense attorney, “until they show up at a district for charging or are just released back out on the street.”

Brian Jacob Church, one of the NATO Three, was picked up for suspected terrorist plotting in connection with protests against the NATO summit. He was taken to Homan Square, handcuffed to a bench for 17 hours, and interrogated without being read his Miranda rights. Anticipating he might be arrested in connection with the protests, Church had scrawled an attorney’s phone number on his arm, and explicitly demanded an opportunity to call that lawyer. That request was denied.

“I had essentially figured, ‘All right, well, they disappeared us and so we’re probably never going to see the light of day again,’” Church said.

Since the raid that resulted in Church’s arrest was well publicized, a team of attorneys was simultaneously searching for him to offer their services. Through 12 hours of active searching, he and his co-defendants could not be located. No booking record existed. Attorneys ultimately complained to Mayor Rahm Emanuel. Only then did they learn about Homan Square, and only hours later were Church and his co-defendants taken for booking at a police precinct.

Richard Brzeczek, Chicago’s police superintendent from 1980 to 1983, who also said he had no first-hand knowledge of abuses at Homan Square, said it was “never justified” to deny access to attorneys.

“Homan Square should be on the same list as every other facility where you can call central booking and say: ‘Can you tell me if this person is in custody and where,’” Brzeczek said.

“If you’re going to be doing this, then you have to include Homan Square on the list of facilities that prisoners are taken into and a record made. It can’t be an exempt facility.”

The NATO Three were ultimately found guilty of lesser charges (possessing an incendiary device and “mob action”), but acquitted of terrorism related offenses.

[T]hey were frequently drunk, high and unable to complete simple tasks, once missing out on a protest because Church had to wait for his pot dealer.

One of the undercover officers told an apologetic Church that he needed to make a to-do list in the morning before smoking pot.

Church also said he wanted to attack four police stations but didn’t want to Google the locations of two of them. Chase advocated attacking Obama’s re-election campaign headquarters with a slingshot and marbles.

“I’m too (expletive) cold to be going anywhere. I want to wrap up in my blanket and sleep,” he said.

A lawyer named Eliza Solowiej told The Guardian that she had represented a man who had already been entered into Chicago’s central booking station, and she had personally observed him in a police station without any injuries. Thereafter, someone changed his name in the system and had him moved to Homan Square without any record of the transfer. After his time in Homan Square, he was then taken to a hospital to be treated for head injuries he had incurred sometime in the interim.

Another lawyer reported taking a call from a worried mother. She believed her 15-year-old son had been arrested, but she was having trouble finding where he was being held. After “12, maybe 13” hours, the 15-year-old was released without charges.

A 44-year-old detainee named John Hubbard died in an interview room at Homan, allegedly of heroin overdose. But The Intercept’s Juan Thompson says there are no official records or even a coroner’s report confirming that cause of death. Nor are there records that explain why he was detained in the first place.

Chicago police at first did not respond to The Guardian’s questions about the facility. Once the story was initially published, the department issued a statement insisting there was nothing untoward taking place at Homan, that records are generated for arrests, and that if “lawyers have a client detained at Homan Squire, just like any other facility, they are allowed to speak to and visit them.”

As noted by The Guardian, the statement does not address how long into an arrest or detention those records are generated, or whether they are made available to the public, such as family members looking for relatives who have been picked up and attorneys searching for their clients. The department did not respond to The Guardian’s request for clarification on that issue.

[A] retired Washington DC homicide detective, James Trainum, could not think of another circumstance nationwide where police held people incommunicado for extended periods.

“I’ve never known any kind of organized, secret place where they go and just hold somebody before booking for hours and hours and hours. That scares the hell out of me that that even exists or might exist,” said Trainum, who now studies national policing issues, to include interrogations, for the Innocence Project and the Constitution Project.

Sarah Baker
Sarah Baker is a libertarian, attorney and writer. She lives in Montana with her daughter and a house full of pets.
Chicago, domestic black site, Homan Square, Nato Three, police