Trigger Warnings and a Police Escort for Christina Hoff Sommers 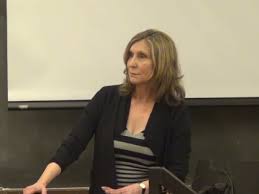 Christina Hoff Sommers, equity feminist, classical liberal and author of the books Who Stole Feminism? and The War Against Boys, gave a speech at Oberlin College earlier this week. The week before that she made a similar appearance at Georgetown University.

Of course, they could have just not attended.

That would seem an ironclad way to avoid being subjected to the dangerous trauma of this shaming, violent, misogynistic, rape-y…uttering of words.

Instead, they wrote a “love letter” to themselves in the Oberlin student newspaper calling Sommers a rape “denialist,” referring to her upcoming speech as “this violence,” and evincing an odd fixation on Sommers’ Twitter followers.

They posted “trigger warnings” around the speaking venue. The signs said loving, “safe,” non-triggering things like:

“RAPE CULTURE is REAL and YOU are a PARTICIPANT.”

These were obviously thoughtfully and carefully crafted to help rape survivors who might be attending the speech to feel safe and avoid being “triggered” as they entered. 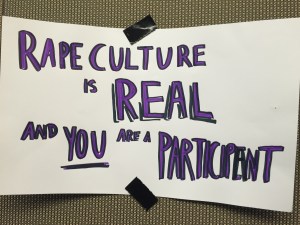 The objecting students also created “alternative safe spaces” for anyone who felt triggered by Sommers’ words (but not the signs). These were in addition to the “alternative safe spaces” of: 1) one’s own dorm room or apartment; 2) the library; 3) the coffee shop; 4) the entire rest of the world; 5) just not going; 6) doing whatever one would have done if Christina Hoff Sommers had never been born; and, 7) hiding under the bed at mommy and daddy’s house.

The existence of the “alternative safe spaces” (the special ones with the vapors and fainting couches, not the seven I listed above) was announced ahead of the speech. This was to help the adult college students who, despite being old enough to vote and go to war, otherwise might not have known they could get up and leave the unlocked auditorium they had voluntarily entered to hear a non-mandatory speech.

Despite their insistence that listening to Sommers speak words was so fraught with peril it required trigger warnings and alternate safe spaces, many of the objecting students nevertheless attended the speeches.

At Oberlin, they interrupted, booed, and mocked a professor who asked them to be civil. Well, that is, except for the ones with the duct tape over their mouths…

Folks, this isn’t about dangerous words.

This is about tribal signaling and performance art.

As anything more, it is at best dead on arrival. Such mindset cannot empower its adherents to compete with women like Sommers, capable of confronting auditoriums of angry protestors, engaging in unfettered debate, examining deeply held beliefs, considering contrary evidence, and revising paradigms and refocusing energy where appropriate.

Deep down they know it.

The echo chamber is guarded so shrilly precisely because of how deeply its occupants fear subjecting their beliefs to scrutiny. But choked off from sunlight and oxygen inside those rigid walls, their ideas wither into limp and lifeless shades of ideas.

They are the reason Oberlin College gave Sommers a two-man police escort.

After the speech, some of them followed her to the restaurant where she was having dinner in order to confront her.

Is that how we do safe spaces? Or is it that Sommers is not entitled to safe space because she’s the wrong sort of woman?

Some women just deserve what they get, I guess.

Students who think they see something dangerous in speakers like Christina Hoff Sommers should consider the possibility that what they are actually looking at is their own reflection.

Sarah Baker
Sarah Baker is a libertarian, attorney and writer. She lives in Montana with her daughter and a house full of pets.
Christina Hoff Sommers, Georgetown, Oberlin, rape culture, Trigger warnings