Do Rich High School Dropouts Do “As Well” As Poor College Grads? 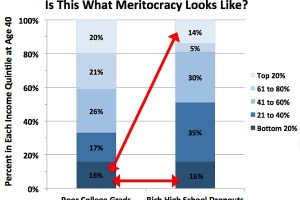 Even poor kids who do everything right don’t do much better than rich kids who do everything wrong. Advantages and disadvantages, in other words, tend to perpetuate themselves. You can see that in the above chart, based on a new paper from Richard Reeves and Isabel Sawhill, presented at the Federal Reserve Bank of Boston’s annual conference, which is underway.

Specifically, rich high school dropouts remain in the top about as much as poor college grads stay stuck in the bottom — 14 versus 16 percent, respectively. Not only that, but these low-income strivers are just as likely to end up in the bottom as these wealthy ne’er-do-wells. Some meritocracy.

So the anger is that some rich dropouts still succeed and make it to the top, and some poor college grads remain on the bottom. Or, to annotate a graph as O’Brien did: 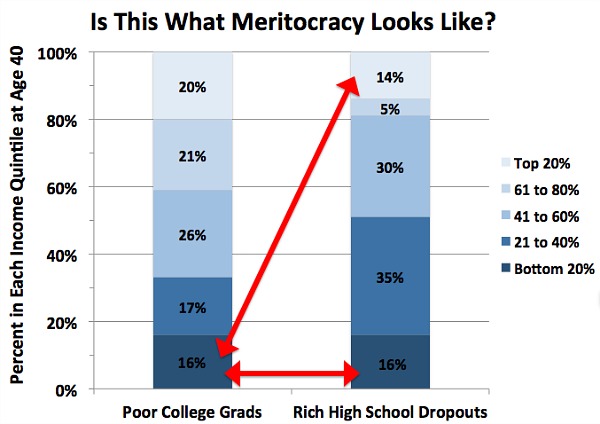 This, however, is a terrible analysis.

Now, nobody will argue that poor kids don’t have an uphill battle from day 1. And nobody will argue that rich kids have a multitude of advantages in front of them. Their path to success is easier. There are many reasons for this, and I’m not going to go into them here, but suffice to say that I agree with the simple premise that it’s harder to succeed when you start out poor.

But what the graph that O’Brien uses to prove his point is actually proving that putting your nose to the grindstone, pushing yourself to enter and complete college, is important whether you’re rich or you’re poor. If rich HS dropouts were successful at a higher rate than poor college grads, I might agree with this analysis. But they’re not. Poor college grads do measurably better than rich HS dropouts.

Yes, some poor college grads still end up on the bottom, and some rich HS dropouts still succeed. But how many, and why? Compare the above chart with the below (also from the Reeves/Sawhill paper): 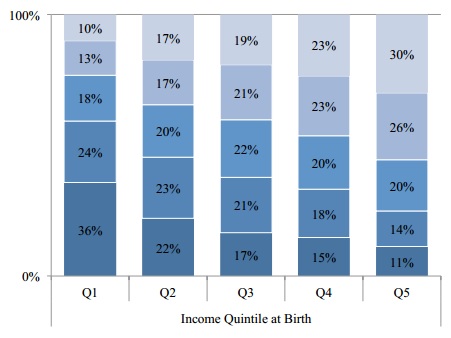 But if you’re poor, and you graduate college, you flip the script. Your odds are very good to go from the bottom quintile to middle class or better. And if you’re rich but don’t graduate college, your odds are better that you’re going to end up in lower middle class or worse. It won’t hold true for everyone, as there are strong cultural factors in play. But those cultural factors are not overwhelming. Demography DOES NOT equal destiny.