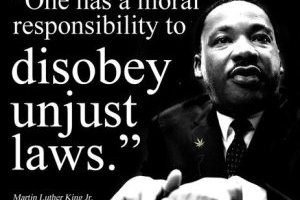 Some laws are so egregious they ought morally be resisted, however destabilizing such resistance might be. Only the most mindlessly authoritarian would disagree.

The hard part is knowing where to draw the lines.

New York City cops are in rebellion, taking a de facto hiatus from policing victimless “crimes.” Whether this is an “important step” toward improved safety and constitutional policing, or a dire threat to the rule of law, seems all a matter of perspective. Cops being as diverse as humans generally, their motivations presumably range from “[a]cting like a bunch of high-school jocks protesting a ban on keg parties” all the way to heartfelt questions about the legitimacy of a system that leaves a man dead for the “crime” of selling loose cigarettes.

Either way, the reduced issuance of petty crime summonses and parking violations will starve the city of revenue, while endangering no one. This strategy, of hurting the mayor’s budget without turning a blind eye to real crime, exposes an unpleasant truth about modern policing: that cops are sent out armed with guns to risk their lives ginning up revenues needed to cover budget shortfalls.

Let that sink in.

I understand the importance of the rule of law. But morality dictates consideration of a system that encourages forceful interaction over such trivialities as selling loose cigarettes, and for the purpose of insulating politicians from the consequences of overspending.

The rule of law is but a means to an end, not an end in itself.

A provocative law review article entitled “The Myth of the Rule of Law” asks the reader to consider the following:

On the basis of your personal understanding of this sentence’s meaning (not your knowledge of constitutional law), please indicate whether you believe the following sentences to be true or false.

_____ 1) In time of war, a federal statute may be passed prohibiting citizens from revealing military secrets to the enemy.

_____ 2) The President may issue an executive order prohibiting public criticism of his administration.

_____ 4) A federal statute may be passed prohibiting a citizen from falsely shouting “fire” in a crowded theater.

_____ 5) Congress may pass a law prohibiting dancing to rock and roll music.

_____ 6) The Internal Revenue Service may issue a regulation prohibiting the publication of a book explaining how to cheat on your taxes and get away with it.

After exploring ways in which seemingly clear rules of law are malleable to reach different ends, based on the perspective of those with the power to apply them, the piece returns to those initial questions:

If your response to question one was “True,” you chose to interpret the word “no” as used in the First Amendment to mean “some.”

If your response to question two was “False,” you chose to interpret the word “Congress” to refer to the President of the United States and the word “law” to refer to an executive order.

If your response to question three was “False,” you chose to interpret the words “speech” and “press” to refer to the exhibition of photographs and paintings.

If your response to question four was “True,” you have underscored your belief that the word “no” really means “some.”

If your response to question five was “False,” you chose to interpret the words “speech” and “press” to refer to dancing to rock and roll music.

If your response to question six was “False,” you chose to interpret the word “Congress” to refer to the Internal Revenue Service and the word “law” to refer to an IRS regulation.

If your response to question seven was “False,” you chose to interpret the words “speech” and “press” to refer to the act of burning a flag.

… Why did you do this? Were your responses based on the “plain meaning” of the words or on certain normative beliefs you hold about the extent to which the federal government should be allowed to interfere with citizens’ expressive activities?

My own answer would have been that the First Amendment neither permits nor prohibits anything. The First Amendment is nothing more than words on paper, incapable of doing anything. It is only our collective willingness to enforce, expand or modify it that has any function; that sufficient numbers of us agree, consciously or not, to permit the exercise of collective force to do one or the other; and that sufficient numbers more passively do not resist.

It bears remembering that enforcing the rule of law was what five New York City officers were doing when they placed Eric Garner in a grapple hold for the “crime” of selling loose cigarettes. As Professor Stephen L. Carter eloquently wrote:

It’s unlikely that the New York legislature, in creating the crime of selling untaxed cigarettes, imagined that anyone would die for violating it. But a wise legislator would give the matter some thought before creating a crime. Officials who fail to take into account the obvious fact that the laws they’re so eager to pass will be enforced at the point of a gun cannot fairly be described as public servants.

Of course, activists on the right and the left tend to believe that all of their causes are of great importance. Whatever they want to ban or require, they seem unalterably persuaded that the use of state power is appropriate.

That’s too bad. Every new law requires enforcement; every act of enforcement includes the possibility of violence. There are many painful lessons to be drawn from the Garner tragedy, but one of them, sadly, is… : Don’t ever fight to make something illegal unless you’re willing to risk the lives of your fellow citizens to get your way.

Some of the loudest complaints about police misconduct are from the same people who demand a leviathan government exercising control over vast areas of our lives. Such control must of necessity be exercised in the form of laws, laws that must be enforced at the point of a gun.

We all draw lines somewhere, between the laws we think ought be enforced, however misguided they might be, for the sake of preserving the legitimacy of the system; laws so egregious and vile in nature, that they must morally be resisted; and those that fall somewhere between, the close calls and grey area where good faith disagreement can be tolerated. The criteria we use, the lines we draw, are inherently subjective.

We should not ask cops to enforce laws that we are unwilling to have them kill to enforce. We should not risk lives enforcing prohibitions against victimless crimes.

If a rebellion by New York City cops is how this change comes—I can live with that.

Sarah Baker
Sarah Baker is a libertarian, attorney and writer. She lives in Montana with her daughter and a house full of pets.
Bill de Blasio, cops, Eric Garner, New York, Rule of Law