The Problem With Today’s ‘Conservatives’: They’re Not Really Conservative 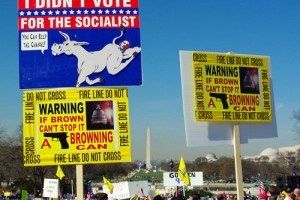 When Republicans took control of the Congress in the 2014 elections, they did so without an agenda or alternative vision for the country. In spite of this, they hold their largest majority since before World War II.

It seems they achieved this, not because they laid out a clear alternative, but simply because the American people perceived Democrats and the left, as having failed to govern the country (or having done so poorly).

However, a couple of long-term problems for the Republican Party have developed since November’s elections. The first being that President Obama’s approval ratings have begun to rebound. The second, is that Republicans are fighting amongst themselves, again, instead of laying out any credible alternative agenda for the country. The Republican Party seems to be strongly divided between it’s “establishment” wing, and a more conservative Tea Party-aligned wing.

The biggest problem however, is that the Tea Party, and many of the self identified “conservatives” aren’t really conservatives at all. They’re really populists, ideologues, and radicals, that have abandoned traditional conservatism.

Ultimately, this is bad for the entirety of what could be called the “center-right”, because these people frankly make us look insane. When you try to build a movement purely on rhetoric and rabble rousing, without a solid foundation, history has shown that bad things happen.

During the French Revolution, there was a faction of revolutionaries called the Jacobins. The Jacobins were fiery populists, who aligned with the mobs on the streets of Paris, and eventually took over the revolutionary government, installing what came to be known as “The Reign of Terror“. Under the Jacobins, the revolutionary councils known as “committees of public safety”, targeted essentially anyone who disagreed with the Jacobins in the slightest, as “enemies of the people”. This demagoguery resulted in the deaths of thousands, in mob led mass executions.

Eventually, the French Revolution collapsed into near anarchy and was devoured, when in reaction to Jacobin misrule, Napoleon seized power in the Coup of 18 Brumaire.

An English member of Parliament, Edmund Burke, warned that the French Revolution would descend into tyranny. In his famous book “Reflections on the Revolution in France”, Burke argued for gradual change; emphasizing the necessity of specific, concrete rights and liberties; and essentially that society could not be, or should not be, molded or reshaped by government, in the name of “reason.” It was an argument against central planning and utopianism before they became more developed political concepts. Burke’s work is regarded as one of the founding documents of Anglo-American conservatism. and even Freidrich Hayek was heavily influenced by Burke.

The latest case in point, the silly and failed attempt to remove John Boehner as Speaker of the House, launched by Tea Party-aligned Congressmen, and egged on by various Washington D.C. and West Coast-based “grassroots” organizations who never miss an opportunity to fundraise over manufactured outrage.

The challenge to Speaker Boehner began when Oklahoma Congressman Jim Bridenstine announced he wasn’t going to vote for Boehner. He cited his opposition to the so-called Cromnibus which was passed in order to keep the government open, late last year. Bridenstine, like many conservatives, was opposed to the bill because it funded the Department of Homeland Security and President Obama’s immigration executive amnesty until February, and because it spent too much. Tea Party opportunists and other irrelevant backbenchers, saw an opportunity for self-promotion and self aggrandizement through the entertainment wing of the Tea Party (talk radio, bloggers who specialize in the daily “outrage”), and decided to “challenge” John Boehner.

Eventually, Congressman Louie Gohmert (R-Texas), and Congressman Ted Yoho (R-Florida), threw their tin foil hats into the ring and challenged Boehner for the position of speaker. In a way, both men are a perfect microcosm of everything wrong with the Tea Party movement. Congressman Daniel Webster (R-Florida) also entered the race, but he’s generally an unremarkable backbencher (as well as one of the most liberal Republicans in congress).

A quick Google search would quickly tell you that these are not serious men, let alone serious alternatives to Speaker John Boehner. No one outside of Florida knows who Daniel Webster is, and sadly that probably makes him the most qualified out of the three. Ted Yoho’s big claim to fame is that he’s a birther who wants to find Obama’s secret Kenyan birth certificate in order to nullify Obamacare or something.

Finally, we have Louie Gohmert who is truly little more than a demagogue with no philosophical foundation. Gohmert once took to the floor of the U.S. House to warn about terrorist babies. Oh and Gohmert is also a birther. Gohmert has a long history of demagoguery both as a judge and a Congressman. There’s crazy and then there’s Louie Gohmert.

Even those who dislike John Boehner (and there are many) would have to concede that, if they were honest, these three men were not qualified to be second in line for the office of President.

The problem, is that instead of presenting a coherent alternative to progressivism, the Tea Party and its allies have resorted to base demagoguery and reactionary populism. Further, they are imposing strict purity tests (the true mark of a Jacobin) to identify who they see as “the enemies of conservatism” and “Betrayers of the American People”. Only their ideas and positions are allowed, all must conform perfectly, there can be no dissent.

Take, for example, the case of Congresswoman Mia Love (R-Utah) a conservative rock star who voted for Boehner to continue as Speaker, and how she was vilified on social media:

It's the year of the spineless GOP Freshman. That's who sealed the reelection of Boehner. Thanks Mia Love and Lee Zeldin for NOTHING.

"Mia Love, you are dead to the conservatives. YOUR FIRST VOTE as a congresswoman was a FAIL. " — agroulx http://t.co/JVVsXJC9Jy

There are many other examples like these on Twitter. Essentially, anyone who voted for the Speaker of the House, who oversaw at the very least a freeze in government spending; is being portrayed as some kind of a liberal, or worse, as having “betrayed the American people”.

The enlarged Federal state was not built in a day and it will not be dismantled in one election, especially when Democrats hold the White House. That’s not how I want things, but that how the world is. Conservatives are supposed to look at the world, understand and accept it for what it is, and understand that radical change rarely works out well.

In the meantime, we must seek to develop a credible, coherent, and comprehensive, alternative agenda for the country. We must get back to first principles and turn away from populism and demagoguery. We must rediscover traditional conservatism and combine that with some Milton Friedman, Charles Murray, and finally add some Hayek to the mix*.

Most importantly, conservatism is a philosophy, and a mindset, not an ideology. Gradual, incremental change, is always a better approach than radical change, because radicalism so often leads to failure at best; at worst, the guillotine or the Killing Fields.

While building a movement with popular appeal is important to the advancement of liberty, we must not let that become the sole focus. Winning without a solid philosophical and intellectual foundation, a principled moral focus, and a realistic view of the world, may ultimately lead to tyranny. That’s why the mindless populism and demagoguery of the Tea Party and the far right must be rejected.

*There are many great conservative/classical liberal thinkers and writers, but those three, along with Russell Kirk, William F. Buckley, and Edmund Burke are the ones you should get started with.

Kevin Boyd
I’m one of the original co-founders of The Liberty Papers all the way back in 2005. Since then, I wound up doing this blogging thing professionally. Now I’m running the site now. You can find my other work at The Hayride.com and Rare. You can also find me over at the R Street Institute.
http://thelibertypapers.org/2005/11/22/a-bit-about-kevin/
conservatism, demagogues, Edmund Burke, Jacobins, Tea Party