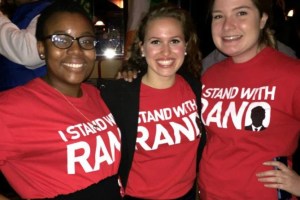 Since the issue is getting a lot of coverage now, I will explain why libertarians are “mostly dudes” and why women are not as statistically likely to support Rand Paul.

Let me begin by explaining why it does not matter.

People are not representatives of the groups to which they belong. We are all individuals in a category of one. Denying differences between broad classes of people, like “men” and “women,” is to deny reality. But it is also a denial of reality and a logical error, to generalize differences between those broad groups to the individuals within them.

The male and female bell curves of any trait encompass wide areas of overlap. They do so for height. They do so for mathematical ability. Other than whatever criteria is used to assign the individual data points to their respective categories in the first place, there is literally nothing true of all men, but not true of any women.

Two-thirds of libertarians are men.

I know math is supposedly hard for us ladies (hey, like libertarianism!). But by my calculations that means female libertarians are not exactly unicorns. They are 33 out of every 100 libertarians.

And I am one of them.

My mother and sister may not call themselves libertarians, but their political views are virtually indistinguishable from mine. I have a female second cousin who is a libertarian. I have worked in a small town in a ten-person office, unrelated to politics, where one other woman was a libertarian, and yet a third voted for Gary Johnson in 2012. My social media feeds are filled with libertarian(ish) women like Julie Borowski, Libertarian Girl, Elizabeth Nolan Brown, Shikha Dalmia, Cathy Reisenwitz, Veronique de Rugy, Lucy Steigerwald, Cathy Young, and more.

So I am not really perceiving this massive shortage of libertarian ladies.

But if I had to guess why there are not as many women as men who are libertarians, two answers seem intuitively compelling:

(I hope since I am a libertarian, and since I spelled it out up above, it is clear that I recognize these things are not true of all women.)

So, no, Jeet Heer, it is not because libertarianism reflects nostalgia for a time when white men were freer, but women and minorities were less so.

We libertarians are more futurist and optimistic than such cynicism admits.

Various women commenting on Rand Paul’s “gender gap” have intuitively landed on one or both of the same explanations as I posited above. Mollie Hemingway pegs libertarian discourse as “high systemizing and low empathizing.” Julie Borowski notes:

Most libertarian women that I have met are very different than your “average woman.” I’d be lying if I didn’t say that I wasn’t intimidated by a lot of them. They’re strong and independent. They don’t give a *beep* what you think about them. Mess with them and they’ll kick your butt. Basically, they do what they want.

In order to speak out about “unpopular/marginal” ideas, you need to have that kind of personality. If you have a great desire to be liked, ha, don’t get involved in libertarianism. Or at least hide your views. If you post about it on Facebook, get ready to get defriended or uninvited to Thanksgiving dinner this year.

But what to Do About It?

First, do not succumb to handwringing. Libertarianism does not need an even split of men and women to be a worthwhile political philosophy. Neither liberalism nor conservatism are split evenly either.

Ideas should be judged on their merits, not by quotas.

Second, there is nothing we can do to make women (as a group, not as individuals) more comfortable being outliers, “going it alone,” or belonging to fringe groups. As libertarianism becomes increasingly mainstream, however, more women (and men) will be comfortable venturing into our territory and supporting candidates like Rand Paul and Gary Johnson.

Third, what we can do to nurture the process along is get better at explaining how our political philosophy is about empathy and fairness. Yes, we oppose minimum wage hikes because we care about the property rights of business owners. However, we also oppose minimum wage hikes because we understand how they hurt people, and hurt poor people most of all.

Too often we fail to defend the moral high ground when by rights it should be ours.

Sarah Baker
Sarah Baker is a libertarian, attorney and writer. She lives in Montana with her daughter and a house full of pets.
gender gap, Jeet Heer, Libertarian, Rand Paul, Zuri Davis