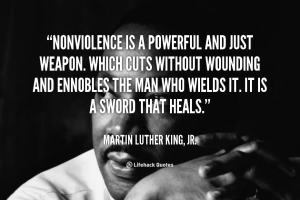 In the year 2015 there are many good reasons to protest: police brutality, injustice, the war on (some) drugs, the war on (some) terror, etc. One thing from Martian Luther King Jr.’s legacy that seems to be lost and something we should rediscover is the art of the peaceful protest and civil disobedience.

King understood that for positive change to occur, he had to truly win the hearts and minds of his fellow Americans. Being a positive example by showing the world that he and his followers would take a stand against injustice without resorting to violence was even more important than the words he spoke to that end. Certainly, not everyone believed in using the non-violent approach. Malcolm X and the Black Panthers believed that violence was necessary to achieve their shared goals.*

Personally, I find the pictures and the videos from the non-violent protests and the acts of civil disobedience to be far more compelling. There’s just something about seeing people refusing to act in a violent fashion against the state which inherently IS violence. This has a way of changing hearts and minds.

Contrast this with today’s protests in Ferguson, New York, and elsewhere concerning the police. For the most part, the protesters are peaceful and are using tactics which King would likely be proud. Unfortunately, however; it’s the nasty protesters that are violent, incite riots, or cheer at the news of cops being ambushed which receives far too much of the publicity. Even holding up signs like “The only good cop is a dead cop” or “fuck the police,” though certainly permissible as recognized by the First Amendment, turns people off who might otherwise be sympathetic to one’s cause.

Sadly, it’s not just a few misfit protesters who think that aggression is sometimes warranted to get one’s way. No less than the pope himself last week in the wake of the Charlie Hebdo terror attacks said: “(If someone) says a curse word against my mother, he can expect a punch. It’s normal. You cannot provoke. You cannot insult the faith of others. You cannot make fun of the faith of others.”

The leader of the same Catholic Church which normally advocates finding non-violent solutions to conflict (such as the Just War Doctrine) says that because someone says something offensive about one’s parents or faith it is permissible to use violence against that person! People’s feeling are more important than the concept of free expression.

Let us all rediscover the art of peaceful protest and civil disobedience on this Martian Luther King Jr. Day.

With economic times the way they are and a demographically changing society, I feel the ethnic tension flowing and the faucet turning, with boiling water threatening to pour on us all. This seems to be an eternal curse of perpetually tribal humanity, and secular humanists seem to be the only ones to not fall on some side of it’s disastrous nature.

As he battles cancer, Christopher Hitchens seems able to battle past the disabling effects of disease and address once humanity once again with reason:

And all this contains the true ingredients of tragedy—and of irony. One of the great advantages possessed by Homo sapiens is the amazing lack of variation between its different “branches.” Since we left Africa, we have diverged as a species hardly at all. If we were dogs, we would all be the same breed. We do not suffer from the enormous differences that separate other primates, let alone other mammals. As if to spite this huge natural gift, and to disfigure what could be our overwhelming solidarity, we manage to find excuses for chauvinism and racism on the most minor of occasions and then to make the most of them. This is why condemnation of bigotry and superstition is not just a moral question but a matter of survival.

This is the tragic flaw. With knowledge of our genetic roots, the reality of our lack of difference becomes undeniable. It is organized religion, with its emphasis on “chosen people,” fate and personality assigned by birthdate that keeps us locked in this death spiral.

For those who seem intent on turning this faucet of hate, I beg you to please stop. What do you expect to gain?

There Is Something Wrong With Mel Gibson

Given that, I think there is an underlying political importance to Mel Gibson’s continued episodes of hate. I don’t think Mel Gibson is just an eccentric, angry actor in the way Russell Crowe is. I think he and his father follow a continuous line of political thought that starts as far back as the Middle Age persecutions, moves toward Adolf Hitler and his stateside apologists and ends up at the like of David Duke, Pat Buchanan (coincidentally, or perhaps not, a Traditionalist Catholic fellow traveler of Hutton Gibson and his son who continues to appear on MSNBC despite having published a pro-Hitler revisionist screed), the Muslim Brotherhood and Mahmoud Ahmadinejad. (Lines of political thought are a really good way of assessing your own political beliefs and making sense of the chaotic political spectrum. Generally speaking mine follow the line of Leon Trotsky, George Orwell and on toward Christopher Hitchens.)

It would be one thing if Gibson’s rough rhetoric were a personal problem. Unfortunately his father shares it:

In his interview on WSNR radio’s Speak Your Piece, to be broadcast on Monday, Hutton Gibson, argued that many European Jews counted as death camp victims of the Nazi regime had in fact fled to countries like Australia and the United States.

“It’s all — maybe not all fiction — but most of it is,” he said, adding that the gas chambers and crematoria at camps like Auschwitz would not have been capable of exterminating so many people.

“Do you know what it takes to get rid of a dead body? To cremate it?” he said. “It takes a litre of petrol and 20 minutes. Now, six million of them? They (the Germans) did not have the gas to do it. That’s why they lost the war.”

Gibson’s homoerotic sadomasochistic torture flick The Passion of the Christ can be found in evangelical households across America, watched as frequently as geeks re-watch Star Wars. Watching Gibson’s film is a constant reinforcement of anti-Semitism; the film portrays the Romans as a helpless bureaucratic body that is forced in to crucifying Jesus Christ in order to appease bloodthirsty Jews. Gibson’s portrayal of the Jews is a narrative as old as Christianity itself and played no small role in their historical persecution.

In that film, Gibson wasn’t just channelling his own madness. Despite the pretty overwhelming support of the worst elements of Israeli messianism, American evangelicals, devout Catholics and other stringent followers of Jesus of Nazareth are not without strong shades of anti-Semitism. (After all, they don’t believe in the savior!) Jerry Falwell was known for making crass jokes about the fiscal habits of Jews while plopping out gems like “The Jews are returning to their land of unbelief. They are spiritually blind and desperately in need of their Messiah and Savior.” In a public spat with his friend and the very intelligent religious/political commentator Dennis Prager (who is also Jewish, as it happens), Little Green Footballs blogger Charles Johnson was able to get Prager (who has done no small act in addressing anti-Semitism) to admit that Pat Buchanan and other elements of the Right are anti-Jewish.

When you hear about Gibson accosting a Jewish police officer or hear a tape of him ranting about how his wife will get “raped by a bunch of niggers” or rallying against “wetbacks,” you’re not just hearing a crazy person. You’re hearing the sick, intolerant, tribal and morally vacant core of Christianity.