One of the Original “Liberty Papers” Turns 800 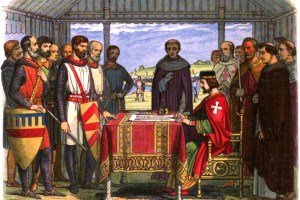 A mere 572 years before the U.S. Constitution and the Bill of Rights, 561 years before the Declaration of Independence, and 465 years before John Locke’s Two Treatises of Government was a government-limiting charter which inspired the authors of each of these was the Magna Carta. In June of 1215, a full 800 years ago, a group of land barons had decided that they had enough of the tyrannical rule of King John. Rather than depose the king outright, the barons forced King John to surrender some of his powers, thus creating the concepts British Common Law and the Rule of Law.

The history of the Magna Carta and how it was almost quashed is quite interesting:

There are four copies of the charter still in existence – one each in Lincoln and Salisbury Cathedrals, and two in the British Library.
The curator of the Library’s exhibit, Dr Claire Breay, told Sky News: “The most important thing about Magna Carta is that it established the principle of the rule of law.

“No free man shall be seized or imprisoned or stripped of his rights, or outlawed or exiled, except by the judgement of his equals or by the law of the land. And that clause is really at the heart of Magna Carta’s fame today.”

Those who negotiated the treaty would be astonished at how its reputation has survived eight centuries, because it was annulled after only 10 weeks.
The Pope ruled that King John had been forced to sign it under duress. Yet in the years afterwards, the language in the charter was revised and reintroduced and became part of the cornerstone of English law.

Vicor Hugo famously said “No army can stop an idea whose time has come.” Shortly after King John’s signing of the Magna Carta, the idea of the rule of law had come; the divine rights of kings was no longer universally accepted.