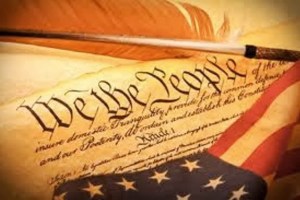 Amendments proposed either way have to be ratified by three-fourths of the states. All 27 amendments to the Constitution have been proposed by the first way. However, many conservatives are calling for an Article V Convention of The States to curb what they see is a Federal government that refuses to deal with a debt crisis, regulatory overreach, infringements upon state sovereignty, and Federal government overreach. Other Article V proposals include the “liberty amendments” that were proposed in 2013 by conservative talk show host and constitutional attorney Mark Levin.

The first problem with the Article V convention is that it’s never been tried before, with good reason. Matthew Spalding wrote this for the Daily Signal:

The requirement that amendments proposed by such a convention must be ratified by three-fourths of the states is a significant limit on the process and would likely prevent a true “runaway” convention from fundamentally altering the Constitution. But we don’t think it is at all clear, for instance, that two-thirds of the states calling for an amendments convention can limit the power of all the states assembled in that convention to propose amendments to the Constitution. Other questions include the many practical aspects of how an amending convention would operate and whether any aspects of such a convention (including going beyond its instructions) would be subject to judicial review.

The final reason why liberty-lovers should reject an Article V convention is that it essentially is a shortcut to doing the hard work of persuading fellow Americans and our representatives that we need to make these changes. What the Article V proponents are essentially trying to do is to overturn 80 years of election results without actually putting in the hard work of persuading fellow Americans that they should make the changes. If they could not convince the American people to endorse this agenda in an election, how are they going to convince 37 states to endorse these ideas?

An Article V convention is a radical measure that will, unfortunately, provide a platform for populist demagogues to promote their agenda to the detriment of liberty. Need I remind everyone that the original mandate of what became the Constitutional Convention in Philadelphia in 1787 was merely to revise the Articles of Confederation. Instead, it produced a brand new governing document. It’s just as likely that an Article V convention will produce a constitution that will radically different than what its proponents advocate.

In the end, there’s just simply too much risk and too many unknowns surrounding the Article V convention to go down that road.

Kevin Boyd
I’m one of the original co-founders of The Liberty Papers all the way back in 2005. Since then, I wound up doing this blogging thing professionally. Now I’m running the site now. You can find my other work at The Hayride.com and Rare. You can also find me over at the R Street Institute.
http://thelibertypapers.org/2005/11/22/a-bit-about-kevin/
Article V convention, liberty amendments, Mark Levin