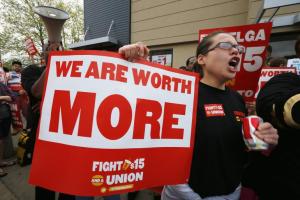 When “progressives” say “the minimum wage hasn’t kept up with inflation”, they’re lying.

Not shading, the truth, exaggerating, or interpreting things differently… they are flat out lying.

… And what’s more, the ones who made up the lie in the first place, know they’re lying (the rest mostly just parrot what they’ve been told).

What exactly would “keeping up with inflation” mean?

So, not only has the minimum wage kept up with inflation, it’s nearly doubled it.

Ok.. well what about more recently?

Funny… that’s exactly what it is today… How shocking.

So, for 30 years, the minimum wage has not only kept up with inflation, for most of that time it’s been ahead of it.

So, how are they lying?

The way “progressives” claim minimum wage hasn’t been “keeping up with inflation”, is by comparing today, with the highest level it has ever been; almost 50 years ago, in 1968, when the minimum wage went to $1.60 an hour ($10.86 in constant dollars).

This was a statistical anomaly.

There’s a long and loathsome tradition of lying with statistical anomalies.

It just so happens that from 1948 to 1968 we had the single largest wealth expansion over 20 years, seen in the history of the nation (about 5-8% annual growth)… Which then crashed hard starting at the end of ’68.

From 1968 to 1984, the U.S. had 16 years of the worst inflation we ever saw, and the purchasing power of ALL wages fell significantly, as wages failed to come even close to keeping up with inflation (we saw 13.5% inflation in 1980 alone, which is about what we see every 4 years today).

It took until 1988 for real wages to climb back to their 1968 constant dollar level, because we were in a 20 year long inflationary recession, complicated by two oil shocks and a stock market crash (actually a couple, but ’87 was the biggest one since ’29).

However, the minimum wage was boosted significantly in that time period, far more than other wages rose, and stayed above the 1962 water mark until the end of that high inflationary period in 1984, declining slightly until 1992, then spiking and declining again until 1997 etc… etc…

Like I said, it was the single greatest expansion in real income and wealth over a 20 year period, in American history.

1968 was a ridiculous historical anomaly… Not a baseline expectation.

So, From 1964 to 1984, the minimum wage was jacked artificially high (proportionally far above median wage levels), and “progressives” chose to cherry pick the absolute peak in 1968 from that part of the dataset, in order to sell the lie.

As to the minimum wage not being a living wage… No, of course its not. It never was, its not supposed to be, and it never should be.

The minimum wage is intended to be for part time, seasonal workers, entry level workers, and working students.

Minimum wage is what you pay people whose labor isn’t worth more than that. Otherwise everyone would make minimum wage. But since 98% of full time workers can get more than minimum wage, they do so.

What should the minimum wage be?

No, of course not. Literally 98% of full time workers already get more than minimum wage. If we abolished the minimum wage, most of them wouldn’t suddenly be paid nothing.

If you don’t want to work for $7.25 an hour, don’t take the job. If nobody offers you more than that, too bad, but that’s all your labor is worth.

If you are willing to work for someone for $7.00, and they’re willing to pay you $7.00, what right does some “progressive” have to tell either of you, that you can’t work for that much?

No-one is “exploiting the workers”, if those workers took the jobs voluntarily, and show up for work voluntarily… If all you can find is a job for less than what you want to work for, you’re not being exploited, THAT’S ALL YOUR LABOR IS WORTH TO THOSE EMPLOYERS.

You may think your labor worth more, but things aren’t worth what you want them to be worth, they’re only worth what someone else is willing to pay for them.

But let’s be generous…

All that said, I don’t think we’ll be able to eliminate the minimum wage any time soon.

So, to those “progressives” who would say “let’s make the minimum wage keep up with inflation”, I agree wholeheartedly… Let’s make it $4.19.