Oath Keepers Protect St. Louis Until Being Disbanded By The Police They Effectively Replaced 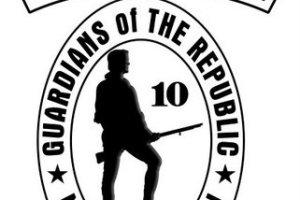 In response to the looting that has damaged numerous businesses in Ferguson, MO since last Monday’s announceemnt that former police officer Darren Wilson would not be indicted for killing Michael Brown, a group called the Oath Keepers descended onto Ferguson to protect businesses from being damaged or destroyed by rioters, oftentimes by setting up armed sentries on rooftops. Over the long weekend, St. Louis County’s police officers demanded that the group disperse.

Threatened with arrest for operating without a license, the volunteers argued but eventually left their positions early Saturday, Rhodes said.

“We are going to go back as protesters,” Rhodes said Saturday afternoon.

“We thought they were going to do it right this time,” Rhodes said of government response to the grand jury decision released Monday in the Michael Brown case. “But when Monday rolled around and they didn’t park the National Guard at these businesses, that’s when we said we have got to do something.

The Oath Keepers were started in 2009 as a militia-like force that advocates military and law enforcement personnel disobey orders that are in violation of the Constitution of the United States. Despite accusations of racism, they were started in 2009 by a Mexican-American, Stewart Rhodes, who graduated from Yale Law School and once worked for Ron Paul. They have dodged criticism for years and are regarded by some as extremists or domestic terrorists, though they maintain a 30,000 strong member base and are highly regarded among libertarian parts of the Tea Party movement.

I am personally sceptical of the Oath Keepers because I feel their tin-foil, Alex Jones-like views on the government are extreme to say the very least. Any group that gains traction due to the election of one man and finds common cause with the birther movement tends to draw scrutiny. With that said, I find it very hard to blame anyone locally for being very happy to see them. Whatever one’s views on Michael Brown’s killing – I was very dim on the “no indictment” ruling – the fact is that St. Louis County has handled the entire situation in Ferguson and surrounding areas in an illegal, borderline evil fashion. They instigated an already edgy populace from moment one, turning military-grade weapons on the citizens they “police” in a method of crowd control so poorly conceived it raised legitimate questions as to whether or not the police were intentionally trying to rile their citizens.

As the grand jury’s announcement approached, the mistakes continued. It was announced at 8PM CST, with advance warning and a preemptive call for National Guard support. They gunned for a fight, prepared for a fight, and then stoked a fight. Since then, the overly militarized police, and the actual military, guarded the police station but left local businesses to burn. After blaming the failure to indict a man who shot at an unarmed teenager twelve times on social media, they proceeded to protect their own stuff while totally abandoning any pretense of protecting anyone locally. The failures of the Ferguson and St. Louis County police departments are so legion, so flagrant, and so damaging that multiple people involved in them should never hold jobs in authority again. Their treatment of those doing their job for them only exemplifies what has been a clown car.

In light of that, is it any wonder that the Oath Keepers – at heart, an anti-government organization that is convinced martial law is imminent – would show up? This isn’t just why they were conceived; it proves all of their fears, all of their statements, and all of their actions to be legitimate, or at the very least to have a degree of truth to them. “The government is against the people!” isn’t just the cry of a guy who failed Western Civ; in this case, it’s a provable fact. The police in this area have shown more effort in going after football players than they have in any form of police work.

In striking down the Oath Keepers, the local authorities might have made them more powerful than they could ever imagine. I expect membership to spike, hard.

Christopher Bowen
Christopher Bowen covered the video games industry for eight years before moving onto politics and general interest. He is the Editor in Chief of Gaming Bus, and has worked for Diehard GameFan, Daily Games News, TalkingAboutGames.com and has freelanced elsewhere. He is a “liberaltarian” – a liberal libertarian. A network engineer by trade, he lives in Derby CT.
http://www.superbusnet.com
Ferguson, missouri, oath keepers, st. louis