A Christmas Without Spying 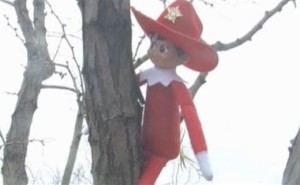 “When parents and teachers bring The Elf on the Shelf into homes and classrooms, are they preparing a generation of children to accept, not question, increasingly intrusive (albeit whimsically packaged) modes of surveillance?” ask Laura Elizabeth Pinto and Selena Nemorin in an essay for the Canadian Center for Policy Alternatives this December.

Dr. Pinto is a digital technology professor at the University of Ontario Institute of Technology. Dr. Nemorin is a post-doctoral fellow at Monash University in Melbourne, Australia. In their column, the two observe that interactive, imaginary play is how children learn to “make sense of their world, their place in society, … their identity, and what is right and wrong.”

But Elf on the Shelf is not interactive. Rather, it is a one-sided, authoritarian intrusion of imaginative “play” (if you can call it that) into the child’s real life:

Elf on the Shelf presents a unique (and prescriptive) form of play that blurs the distinction between play time and real life. Children who participate in play with The Elf on the Shelf doll have to contend with rules at all times during the day: they may not touch the doll, and they must accept that the doll watches them at all times with the purpose of reporting to Santa Claus. This is different from more conventional play with dolls, where children create play-worlds born of their imagination, moving dolls and determining interactions with other people and other dolls. Rather, the hands-off “play” demanded by the elf is limited to finding (but not touching!) The Elf on the Shelf every morning, and acquiescing to surveillance during waking hours under the elf’s watchful eye. The Elf on the Shelf controls all parameters of play, who can do and touch what, and ultimately attempts to dictate the child’s behavior outside of time used for play.

The gaze of the elf on the child’s real world (as opposed to play world) resonates with the purpose of the panopticon, based on Jeremy Bentham’s 18th century design for a model prison (a central tower in a circular structure, surrounded by cells).

Anthony L. Fisher writing at Reason connects the point Pinto and Nemorin are making about the Elf of the Shelf—the “creepy side-eyed gnome [who] has spied and informed on millions of kids to an unaccountable power broker at the North Pole—to the “Stasi-meets-stalker lyrics” of Santa Claus Is Coming to Town.

It is the sort of thing that makes people roll their eyes at libertarians. But consider my own experience.

“Mom, why does Santa Claus think it’s bad when kids cry?” my daughter asked a couple of weeks ago.

“Hmmm… Well…. Sometimes it can be annoying when kids are crying or being whiny and no one else can talk because the kid is taking all the attention.”

Not my proudest moment as a parent, I confess. We were in the car, the roads were slick, and I was distracted.

I was fixated on my “Santa Dilemma.” I have truthfully answered every hard question my kid has asked: how babies are made; why her parents do not live together; about religion and death.

The last one was the hardest.

But I have told vast lies about Santa, manufactured complex, extensive secondary lies in support of the claim that such a being exists. Now she is old enough to recognize that Santa’s existence is inconsistent with everything else she knows of the world; to analyze the available “evidence” for Santa, for flying reindeer, elves, a village located at the North Pole, and for Mrs. Claus.

If she asked me flat out, I would confess everything. But all she does is probe around the edges, and I cannot bring myself to utter the words.

I made it all up.

The gnawing guilt over whether I am making the right choice between destroying the magic or allowing the magnitude of betrayal to grow with each passing year got in the way of my hearing the question behind the question.

Why does Santa Claus think it’s bad to cry?

Two days later, I got it.

“Mom, if you get on the bad list, do you stay on it forever, or is it just for that year?”

My daughter’s voice was tremulous and thick with emotion. We were in the car again, on the same slick roads. But all at once, it hit me.

When she cries, it is usually over something real, something that merits tears. Someone stopped being her friend at school. Or she misses someone in her family.

Why indeed would Santa think that’s “bad?” Who is Santa to decide?

This is not a concept I have taught her. We have no “naughty and nice” lists. Our Elf gets played with like a doll. He never spies or tattles. Yet somehow my daughter has picked up on the concept.

I shut it down.

“I know some of the songs talk about that. Or maybe your friends at school talk about it. But Santa Claus does not do that in our family. We don’t have naughty and nice lists. All the kids in our family are on the nice list because all the grownups love them no matter what. Those songs are just silly things people say. It does not work that way in our family.”

As Pinto and Nemorin observe:

Under normal circumstances, children’s behaviour (i.e., what is “naughty” and what is “nice”) is situated in social contexts and mediated by human beings (peers, parents, and teachers) where the child conceptualizes actions and emotions in relation to other people and how they feel.

Through play, children become aware about others’ perspectives: in other words, they cultivate understandings about social relationships. The Elf on the Shelf essentially teaches the child to accept an external form of non-familial surveillance in the home when the elf becomes the source of power and judgment, based on a set of rules attributable to Santa Claus.

… Broadly speaking, The Elf on the Shelf serves functions that are aligned to the official functions of the panopticon. In doing so, it contributes to the shaping of children as governable subjects. 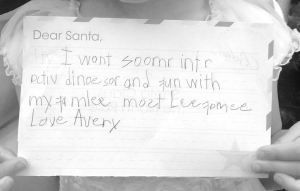 Before a certain age, children’s behavior is either genetic or it is learned from their environment. Manipulating them with an omniscient, omnipotent “daddy” overseer—a god-power with a jolly laugh and a bag full of rewards for conformance—is just passing the buck.

I prefer to let my daughter learn right and wrong by interacting with real people, not under threats from imaginary spies. I prefer to let her enjoy the magic of the season.

Sarah Baker
Sarah Baker is a libertarian, attorney and writer. She lives in Montana with her daughter and a house full of pets.
Christmas, Elf on the Shelf, Naught, Nice, Spying