Yes, There Really Are Two Americas. Look At How Different The South Is 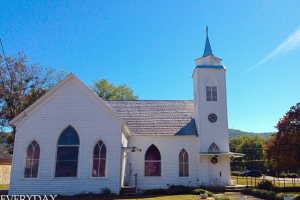 This year marks the 150th anniversary of the end of the War Between the States. The Northern states, fighting to preserve the Union and (later) to end slavery, defeated the Southern states in a war that resulted in over 600,000 dead.

The war all but ended the concept of state soverignty as the question of secession was decided on the battlefield. The war also gave birth to concept of American nationalism as Americans began to consider themselves as American before being a citizen of their state.

However, America is probably now divided more than it has been in decades. The nation seems to be hopelessly gridlocked politically. Meanwhile, the culture wars are in full swing with social justice warriors going to war against traditionalists and libertarians. There really are two Americas.

What explains the division? I argue that culture and region probably provide the best clues to the division of America.

The Economist had an excellent article earlier this month describing how the South is still culturally different from the rest of the country. Why is that the case?

The dividing line is actually religion.

Religion is a better explanation of southern exceptionalism. The civil war divided most of America’s Protestant sects, says Mark Noll of the University of Notre Dame. Both the Presbyterian and Methodist churches split into northern branches, which opposed slavery, and southern branches, which did not. Even after slavery ended, theological divisions persisted. In the north, which saw mass immigration from all over the world in the decades after the war, Protestant churches had to find some accommodation with Jews, Catholics and, eventually, non-believers.

In the South the share of those born outside America (which was low to begin with) actually fell after the civil war. New migrants moved west or north but rarely south. Because of this, southern churches could hold more traditional views without challenge. Those tented revival meetings that were such a feature of southern Protestantism were not intended to win converts so much as to purify and strengthen beliefs that were already there.

The Southern Baptist movement, which is strongly associated with the “values voters” who favour the Republicans, has its origins in support for slavery. Southern Baptists have long since updated their views on race, as the many black Southern Baptist pastors attest, but the movement’s social conservatism endures. And southerners are unusually observant: Utah is the only non-southern state where church attendance is as high as in Dixie.

Southerners are also known for being fiercely individualistic. As the rest of America becomes more secular, it should be no surprise that the region still strongly believes in the Protestant work ethic and tends to be more supportive of limited government. They’re also willing to forgo a large portion of the safety net because religious charities will largely step up and fill the role.

Here’s an interesting map from The Economist article. 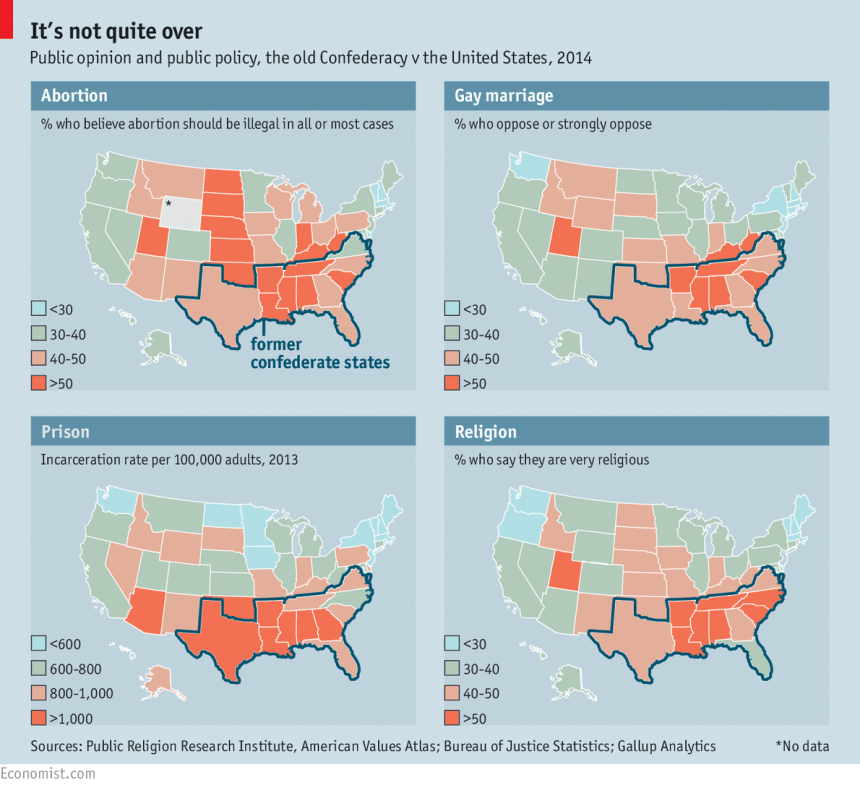 A lot of the orange on the map corresponds to the red state/ blue state maps on presidential elections. The more secular states tend to vote Democratic while the more religious states vote Republican. The views on abortion and gay marriage also tend to align with religious viewpoints.

As you can see, America is deeply divided between a more religious and ironically more individualistic South and Midwest and the more secular coasts. Could the differences between these two Americas lead to secession and civil war? Who knows.

Now, I don’t believe you have to be religious to be moral and that all religious people are moral. But I do believe that a free society only survives when it’s populated by a moral people. The purpose of this post is not to pass judgement on anyone’s religious beliefs.

Let me close with something. We have quite a few non-religious and atheist contributors here who believe in free markets and secular values. I value them all and I’m proud to call them friends. I also know they’re the exception, rather than the rule among secularists. Most atheists generally lean to the left and conservative and libertarian atheists tend to be the exception than the norm.

Kevin Boyd
I’m one of the original co-founders of The Liberty Papers all the way back in 2005. Since then, I wound up doing this blogging thing professionally. Now I’m running the site now. You can find my other work at The Hayride.com and Rare. You can also find me over at the R Street Institute.
http://thelibertypapers.org/2005/11/22/a-bit-about-kevin/
atheism, North vs South, religion, role of government, secularism