In the Wake of Obergefell v. Hodges: Gay Marriage, Religious Liberty, and the Free Markets 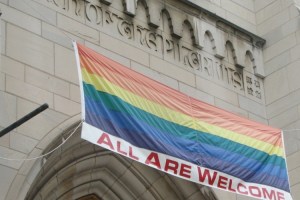 [Photo: Church of the Pilgrims, a Presbyterian USA Church in Washington DC, via Wikimedia Commons.]

On Friday, June 26, 2015, the Supreme Court held in Obergefell v. Hodges that under the Fourteenth Amendment, states are required to license marriages between same-sex partners and to also recognize same-sex marriage licenses from other states. The topic of same-sex marriage is probably one of the most polarizing topics in modern-day America. Over the past several days I have seen dozens of people, both for and against same-sex marriage, acting hateful to one another, unfriending and/or blocking people on social media because they have different views, and just having a very nasty tone. But why? Why can’t we have a dialogue on the topic? Let’s face it. Obergefell is now the law of the land. The purpose of this post is to try to open that dialogue. So now that gay marriage is legal in all 50 states, what comes next?

Furthermore, the right to marry is guaranteed under the Equal Protection Clause of the Fourteenth Amendment. Anytime that a fundamental right is restricted to a group of people, the government bears the burden of proving that the law is necessary to meet a compelling government interest, that it is narrowly tailored to meet that interest, and that the means of implementing the law is the least restrictive means available. The Court found that there is no compelling government interest in denying same-sex couples the fundamental right to marry solely because of their sexual orientation. This is not creating new law. This is the Supreme Court telling the states that any law which restricts fundamental rights between consenting adults is unconstitutional.

Another argument that I often hear is that people think that this should be left up to the individual states to decide. That would be true under the Tenth Amendment. However, the Tenth Amendment only applies to powers not delegated to the United States by the Constitution. The Supreme Court has the power to interpret these laws under the Fourteenth Amendment. So the states’ rights argument doesn’t apply. Bans on same-sex marriage also violate the Privileges and Immunities Clause of the Fourteenth Amendment. This means that citizens who move to a new state are entitled to the same rights and privileges of citizens in the new state. The state cannot discriminate against them. Therefore, a marriage license that is valid in Massachusetts is also valid in Mississippi. A state cannot discriminate against people who move from other states.

This is not a legislative issue either. As Justice Kennedy stated:

The dynamic of our constitutional system is that individuals need not await legislative action before asserting a fundamental right. The Nation’s courts are open to injured individuals who come to them to vindicate their own direct, personal stake in our basic charter. An individual can invoke a right to constitutional protection when he or she is harmed, even if the broader public disagrees and even if the legislature refuses to act. Obergefell (slip op., at 24)

So even though the ideal process may be to go through the democratically elected legislature, this does not preclude one from raising the issue before the Court if his or her fundamental rights are abridged.

Therefore, the Supreme Court did not create a new law. They did not legislate from the bench. This is not a case of judicial activism run amok. Even if you do not agree with gay marriage, at least understand that the government cannot deprive others of fundamental rights that are given to the rest of us.

Rest assured that just because same-sex couples can now marry in all 50 states, it does not mean that the government can discriminate against religious institutions. The government should not force any particular denomination, pastor, priest, or clergy to perform a same-sex wedding against their will. This would violate the Free Exercise Clause of the First Amendment.

I don’t foresee this as much of an issue. Most gay people that I know would get married outside of the church anyway. But if a same-sex couple does want to get married in a particular denomination, their right to marry is not infringed by a pastor’s denial to perform the service. The same-sex couple is still free to seek out another pastor. If a Southern Baptist church does not want to perform the ceremony, the couple can go to an Episcopalian church. If a pastor with the Presbyterian Church of America (PCA) declines to perform a ceremony based on his religious conviction, the couple can seek a pastor with the Presbyterian Church USA (PCUSA) willing to perform the ceremony.

Therefore, I don’t see this decision as an attack on our religious liberties. Every denomination should be able to exercise their faith and religion as they see fit under the Free Exercise Clause of the First Amendment. If you do agree with gay marriage, at least understand that the government cannot infringe on a clergy’s right to exercise his or her faith by declining to perform a same-sex marriage.

Okay. So now same-sex marriage is legal in all 50 states. How does this affect the markets and what does it mean for all of the bakers, florists, photographers, et. al who decline their services to same-sex couples? As a Christian AND a libertarian, I sometimes find myself at odds with…myself. Even if I disagree with something that goes against my convictions, it doesn’t give me the right to deprive another of their rights or hate on them for their choices. So I want to view this topic in two lights. How should this be handled with regard to the free markets and the courts? And how does this appear in the eyes of God?

Over the past several years, Christian wedding service providers, such as bakers, florists, and photographers, have declined to provide their services to same sex weddings. In Colorado, Masterpiece Cakeshop was sued for failing to make a wedding cake for a same-sex reception. Despite the owner’s willingness to serve homosexuals in his establishment, he believes that making the wedding cake means that he is participating in the union and it goes against his convictions. More recently, in Oregon, an administrative judge proposed that Sweet Cakes by Melissa pay a same sex couple $135,000 for refusing to bake a cake for a same-sex marriage. Then of course, there was the New Mexico case where the NM State Supreme Court held that Elane Photography discriminated against a same-sex couple by refusing to record their wedding, despite their policy on welcoming gay couples for other services.

From a free market, libertarian position, I disagree with all of these decisions. In each of these cases, the business owner was willing to serve gay couples, but did not want to participate in the wedding ceremony. Businesses are rewarded or punished in the marketplace for their stances and services. If a customer doesn’t like their stance, s/he does not have to give them business. Let the markets dictate what happens to the business. I also understand the business point of view that their services are forms of expression. They should be protected from being forced to cave on their religious convictions. If they don’t want to express themselves in that manner, I don’t agree that they should be forced to. But does that mean that it’s the right decision?

As Christians, is this the way that we are to show our love to the world? In Matthew 22:36-40, Jesus tells us that we are to first, love the Lord our God with all our heart, soul, and mind and second, that we are to love our neighbors as ourselves. When we decline these services to others, are we loving our neighbors as ourselves? Are we reflecting the love of Jesus as we are called to do? I don’t think so. Jesus never really hung out with the religious folks. He was always meeting with, preaching to, and loving on the fishermen, the taxcollectors, the prostitutes, the dregs of society. Jesus said that he didn’t come for the righteous or powerful, but to save those who are lost. When we refuse services to same-sex couples, are we drawing them closer to God, or are we just pushing them further away?

I think that it’s time that we love our neighbors as ourselves.

Albert Northrup
Albert is a licensed attorney and holds a J.D. from Barry University School of Law as well as an MBA and BA in Political Science from The University of Central Florida. He is a conservative libertarian and his interests include judicial politics, criminal procedure, and elections. He has one son named Albert and a black lab puppy named Lincoln. In his spare time, he plays and coaches soccer.
Free Markets, gay marriage, Obergefell v. Hodges, Religious Liberty, SCOTUS