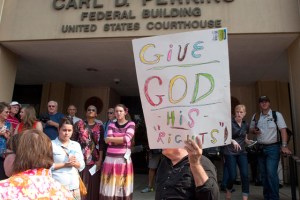 For decades, social-order authoritarians have been girding themselves in the armor of Borkian judicial restraintism in their battle against the phantom threat of wanton lifestyles. Naturally, the Supreme Court’s decision in Obergefell v. Hodges has sent them full-froth.

The jailing of Rowan County, Kentucky, clerk Kim Davis for refusing to issue same-sex marriage licenses is taking the froth to a whole new level.

A growing legion of raving statists are now openly prepared to sacrifice individual liberty on the altar of social conformity; to dismantle more than 200 years of limited-power governance, checks and balances, and judicial review of government overreach, as the acceptable price of empowering political majorities to impose their collective will; to destroy the religious and economic liberties they support in the hopes of quashing the social liberties they do not.

What they fail to see is that this very deference to populist will has delivered the leviathan government under which we now endure, its millions of pages of rules and regulations, its $18,000,000,000 in debt, and its overarching micro-management of our lives through such legislation as the Affordable Care Act—upheld twice now by the judicial poster-child for the very deference the raving frothers demand.

He understood with clear-eyed conviction that the results in NFIB v. Sebelius and King v. Burwell were the price of favoring legislative and executive will over individual liberty. And he did not fail to deliver.

Rather than double-down on this doomed path, conservatives should embrace the role of the judiciary in our constitutional framework.

SCOTUS Has No Power to Expand Government, Only to Protect Individual Liberty

The Supreme Court cannot enact legislation or regulation. It cannot order expansion of the other two branches. It can only respond to their actions. It does so in one of three ways: 1) upholding the action as constitutional; 2) declaring the action unconstitutional and therefore invalid; or, 3) requiring an otherwise permissible exercise of power to comply with the Equal Protection Clause.

Thus, the Court’s power lies solely in preserving individual liberty. It cannot initiate (although it can permit) an encroachment thereof. In that framework, “restraint” can only mean “abdication,” and complaints of “activism” have no meaning. The Court cannot create “new law.” It did not do so in Obergefell.

The Holding in Obergefell v. Hodges

In an effort to ameliorate the obvious political problems with “banning” people from marrying, even ardent opponents of same-sex marriage tend to acknowledge that free citizens have the right to pair-bond, cohabitate, share beds and raise families. But lest any forget, in 1924 police raided the home of Mildred and Richard Loving and charged them with a felony punishable by five years in prison for the “crime” of being married. Until 2003, U.S. citizens could still be arrested and jailed for engaging in consensual, adult sexual relations in the privacy of their own homes. As recently as 2012, North Carolina made it a crime punishable by actual jail time for ministers to perform marriage ceremonies for couples with no valid state-issued wedding license.

With respect to this issue, SCOTUS held that the right to pair bond with a willing partner, to identify such coupling as a marriage, and to be so treated by willing members of one’s community, all fall within an area of liberty so fundamental to the existence of free individuals and societies that it cannot be circumscribed by government force.

The second form of state action at issue in Obergefell concerned state licensing programs that give official imprimatur to certain opposite-sex couples, but deny such benefit to otherwise similar same-sex couples. SCOTUS held that if states voluntarily implement such programs, they must administer them commensurately with the Equal Protection Clause.

It did not create new legislation.

Nevertheless, in response to this relatively innocuous decision about the limits of state power, the frothers have embarked on a path so dire and chilling it should keep any genuine defender of liberty awake at night.

A Dismantling of Liberty

A true proponent of limited goernment would embrace the concept of rights so fundamental to the existence of freedom that they cannot be surrendered to the collective; would defend the notion that the powers of government are few, narrow, and enumerated, while the rights of individuals are many, broad, and unenumerated; would include in that list of individual rights the accumulation and enjoyment of the fruits of one’s labor, the pursuit and acquisition of the trappings of “happiness,” the enjoyment of life and liberty; and would insist on judicial review as protection against federal and state encroachment of such rights.

Such views have found some degree of support from at least one 2016 POTUS candidate. In July, Senator Ted Cruz (R-Tex) held a congressional hearing focused on “reining in” the only branch whose power lies solely in protecting individual liberty.

This is shameless, inexcusable statist inanity.

Left to the whim of legislatures, the Constitution would literally have no effect. Of all the lunacy on the right this election season, this is the most chilling.

Where This Lunacy Leads

Absent the contempt action against Kim Davis, blue states can withhold gun licenses by employing clerks who object to their issuance on religious grounds.

In their irrational fear of the boogay man, statist conservatives have become their own worst enemy. And their weapon of choice in this self-defeating war continues to be the myopic insistence on “judicial restraint:”

For years, “judicial restraint” has been primarily about not thwarting the will of “democratic majorities.” There are myriad doctrines to accomplish this. For example, you adopt a “presumption of constitutionality” that cannot be rebutted. Or find a “saving construction” of a statute to avoid finding it unconstitutional. Or you “defer” to administrative agencies’ interpretation of statutes. Or you make a statute “work” as the “legislature intended” (even if that means ignoring the plain or natural reading of its words).

We have now seen the fruition of the decades-old demand for “judicial restraint.”

It is the holdings in NFIB v. Sebelius and King v. Burwell.

The Misguided Meaninglessness of Judicial “Restraint”

Despite conservative howls to the contrary, in both NFIB v. Sebelius and King v. Burwell, John Roberts did exactly what he had been programed to do by decades of Borkian restraintism. In the first, after finding that the Commerce Clause did not empower the federal government to mandate health insurance, Roberts nevertheless found a way to “save” the Act by rewriting it as a tax. In the second, he deferred to administrative interpretation of the Act.

As George Will has noted:

Conservatives are dismayed about the Supreme Court’s complicity in rewriting the Affordable Care Act — its ratification of the IRS’s disregard of the statute’s plain and purposeful language. But they have contributed to this outcome. Their decades of populist praise of judicial deference to the political branches has borne this sour fruit.

Many good conservatives truly wanted Obamacare invalidated in NFIB because it was unconstitutional. And they then sincerely wanted it to be enforced according to its terms in King. But selecting judges with the judicial mindset of “judicial restraint” and “deference” to the majoritarian branches leads to the results we witnessed in NFIB and King. If conservatives persist in supporting presidents who select judges on this basis, they will persist in being disappointed.

Winning Obergefell on the grounds urged by Chief Justice Roberts in his dissenting opinion also gives you NFIB and King.

In fact, it gives us even more than NFIB and King. It gives us what has always been the goal of progressivism: removal of constitutional limits on government action, deconstruction of checks and balances, and dismantling of separation of powers.

It gives us unity of the branches in the wielding of unlimited power.

Sarah Baker
Sarah Baker is a libertarian, attorney and writer. She lives in Montana with her daughter and a house full of pets.
John Roberts, judicial engagement, Kim Davis, Obergefell, Same-sex marriage