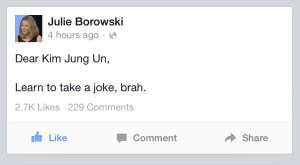 It should come as no surprise that a petty little foreign dictator is trying to silence speech he finds offensive using threats of violence. Here in the United States, we have our own homegrown petty dictators doing their best to suppress speech they dislike every day. Like Kim, their refusal or inability to simply state their disagreement persuasively reveals them as the petulant, tyrannical little egomaniacs they are.

Preliminarily, let us dispose of the erroneous notion that there are any Constitutional implications to this issue, a confusion resulting from the sloppy substitution of the term “free speech” for the actual text of the First Amendment. Sony Picture’s difficulties do not stem from any legislative action of a U.S. government body. Sony’s rights under U.S. law to make and distribute The Interview are not in question. Sony’s difficulties arise from actions taken by hackers, perhaps connected to Pyongyang.

The First Amendment acts as a restriction on legislative action by U.S. government bodies. It does not restrict the private actions of businesses, churches, employers, property owners, criminal hackers, or petulant foreign tyrants. Hacking emails and making threats are crimes. Sony and the theater chains have the right to be protected from criminal acts. Those rights do not stem from the First Amendment.

But just because private action to suppress speech is permitted, that does not make it desirable. Nevertheless, homegrown tyrants in the U.S. increasingly resort to silencing, rather than simply persuasively voicing their disagreement with speech they find offensive.

Mahmood is a student at the University of Michigan. There he penned a column for the university’s conservative alternative newspaper, The Michigan Review. The essay was intended as satire mocking political correctness, victim identity politics, and “trigger warnings.”

It was called “Do the Left Thing” and accompanied by an all-caps “TRIGGER WARNING!” In the piece, Mahmood talks about “microaggressions” against left “handydnyss,” including one incident where he slipped in white-privilege snow, put out his left hand to catch himself, and was offered assistance by a white, cis-gendered m@n. In that moment, Mahmood begins to think “intersectionally” about what it is to be a left-handyd individu@l. He spurns the right-hand of assistance and the other man calls out, “I was just trying to do the right thing!” Mahmood has an epiphany about the right-handed privilege behind the words “right thing” and how the word sinister originally meant left-handed. He closes by urging people to do the “left thing” (which might be a double entendre of sorts). Read the whole thing here.

The column, as noted, ran in the conservative Michigan Review. But Mahmood was also a writer at another campus paper called The Michigan Daily. A writer at The Daily claimed to feel “threatened” by the piece. Mahmood was asked to apologize. He refused.

Shortly thereafter, he was fired based on a provision in The Daily’s bylaws that prevents students who work at The Review from also writing for The Daily unless they obtain prior permission from The Daily’s editor-in-chief. Of course, some people have speculated that Mahmood was not really fired for violating the bylaws, but rather for writing a column deemed offensive. Either way, there are no First Amendment implications. The Daily can fire writers for any reason or none at all.

But why does it want to? Why this need to punish people rather than respond to ideas? Whither this seemingly growing compulsion, not just to disagree, but to suppress and silence all speech deemed offensive?

The breadth of the problem is highlighted by what happened to Mahmood next. His off-campus apartment was vandalized with eggs, hot dogs and pictures of Satan. The aggressors printed copies of “Do the Left Thing” and left them at his door with hateful messages scrawled across: “Everyone hates you, you violent fuck;” “Shut the fuck up;” and “Do you even go here? Leave.” 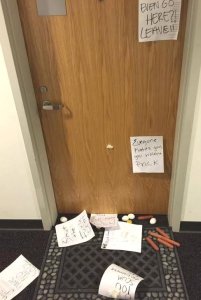 Mahmood now says he wonders if he would do it all over again.

But I never, ever feel compelled to silence the people with whom I disagree. At most, I would be satisfied with keeping their speech out of my home and my business and off my private property. I have no compulsion to make it cease existing. I am happy to simply state my disagreement, and to prove them wrong with words, logic and evidence.

Silencing is the tactic of people who are insecure in their own arguments—or incapable of making them at all. They merit no more respect for their terrorist tactics that Kim Jong Un does for his.

Sarah Baker
Sarah Baker is a libertarian, attorney and writer. She lives in Montana with her daughter and a house full of pets.
First Amendment, Kim Jong Un, Omar Mahmood, Silencing, The Interview