Free Speech Aside, Why We Must Defend Those Who Draw Muhammad 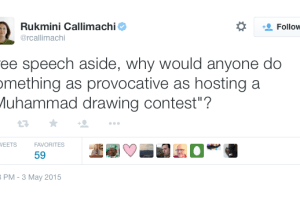 “Free speech aside, why would anyone do something as provocative as hosting a ‘Muhammad drawing contest’?”

New York Times reporter Rukmini Callimachi asked that question on Twitter at 8:08 p.m. on May 3, within hours of gunmen opening fire at a “draw Muhammad” event in Garland, Texas.

It is tempting to answer Callimachi’s question dismissively. Speech needs no why. Freedom of expression is its own raison d’être.

That is in fact what I believe.

I am a freedom fetishist.

But perhaps we have strayed so far from our classically liberal tradition, become so complacent inside the bounds of our own civility, that we must deign again to explain the why of it.

Free speech aside, why depict Jesus Christ floating in urine? Why paint the Virgin Mary splattered by dung and surrounded by hovering vaginas? Why fake an interview wherein Jerry Falwell confesses to losing his virginity with his mother? Why produce the musical The Book of Mormon?

Free speech aside, why does anyone, ever, do or say or think or draw or write anything profane or blasphemous or provocative or controversial or impolite or mean-spirited or harsh or unkind?

Do only certain answers to that question justify the exercise of such freedom? 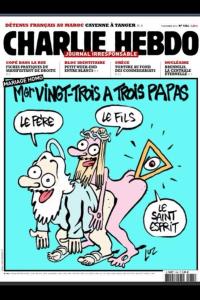 I sit as I write this in a crowded coffee shop. The tables are small and closely spaced. There are men seated at the two tables on either side of me. All three of us have matching disposable cups of overpriced coffee sitting precariously on the edges of our small tables crowded beside our silver laptops.

There is no way for me to turn my laptop to prevent them both from seeing the screen. After reading the Wikipedia entries for the artwork I mentioned above, I peruse galleries of Charlie Hebdo covers looking for examples of images targeting Christian and Judaic ideas. 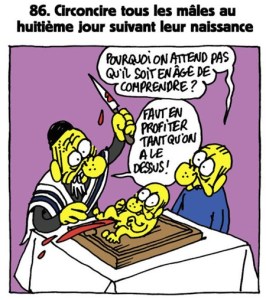 I wonder to myself, what do these men sitting so closely beside me think of these images? By now, they have surely glanced over and seen them on my screen. What meaning have they ascribed to them, to my perusing of them here inside the narrow confines of this crowded coffee shop?

I find my mind flowing back through the years to another table in another time. It is more than a decade and a half ago. The table is bigger, square instead of round. In a lunch deli, not a coffee shop, and not at all crowded. I am having lunch with a friend. It is before the days of smartphones. We are reading different sections of a shared newspaper.

An article captures my attention. I summarize it aloud for my friend. A couple struggling with fertility sought help from a fertility clinic. Ultimately the wife was implanted with embryos that were successfully fertilized using her eggs and donor sperm. A baby was born.

Only there had been a mix-up with the donor sperm used by the clinic. The baby does not have the right look to her parents’ way of thinking.

Her skin is too dark. Her hair is too kinky.

The parents are suing. The article closes with a quote in which they insist they are not racist.

My friend snickers. We both get it. We are young and smug and sure of ourselves, signaling our mutual membership in the best of all possible tribes. We start riffing off each other, back and forth, mimicking all the things we imagine people blissfully unaware of their own contrivances say in such circumstances.

We’re not racist. We just don’t think the races should mix.

We’re not racist. This is about the children.

We’re not racist. We have black friends.

A man at a corner table looks up from behind his own newspaper and frowns at us.

Jerk. I immediately assign him to one of those other, less desirable tribes. One whose members remain fatuously assured of their enlightened values right up until the moment they are handed that baby. The swaddled bundle of Other that forces them to confront the things they had until that point been able to deny existed inside their own minds.

Does he think we are the—?

Did he misunderstand? We were only…

What? I struggled to think of the right words to describe what we were doing.

I am fifteen years away from knowing what Charlie Hebdo is.

Poe’s Law is not yet a thing.

All of sudden I see how the view might look from his table. I am no longer sure which of us belongs in which tribe. Which of us is blinded by our own contrivances.

It is not always obvious.

It is not always possible to find a single objective truth in satire, in mockery, in fiction, in art. It is not always easy to define the line between the thing mocked and the mockery itself. Between racism and the illustration of racism. Between targeting ideas and targeting people. To avoid the place where laughter collides with conscience. To know if we are punching up or down.

To avoid the inherent limitations of the views from our own tables.

But it is in those moments when self-doubt obliterates contrivance that paradigms shift. It is in the moments when we finally sense the chinks in our own armor of righteousness that we fully appreciate the limitations of our perspectives. It is where we straddle those lines that cannot be drawn that real debate occurs and social change is worked.

There is inherent value in the speech that drives us to the place where the curtain is pulled back.

As Caleb Crain, author of Necessary Errors, writes on his Steam Thing blog:

It’s possible, of course, to see the antiracist message of one of the Charlie Hebdo cartoons as no more than a cover for an underhanded relishing of the racist imagery deployed in it. Parody usually does participate to some extent in the energy of what it parodies; that is one of the risks it runs. Humor is not pure. It speaks to us through our flaws, as well as speaking to us about them—envies and hates, as well as greeds and lusts—and it can’t exist without the license to work with dark materials.

Last year at the University of Iowa, a visiting professor created a sculpture of a Ku Klux Klansman papered with articles about racial tension and violence over the last 100 years. Some people complained that it was racist, and the sculpture was removed. Its creator, Serhat Tanyolacar, intended the sculpture to confront the comfortable assumption that our racial frictions are all safely in the past.

Can one of these interpretations be pronounced objectively correct to the exclusion of the other? They are like conjoined twins—one good, one evil—and you cannot kill one without killing the other.

If the message cannot always be nailed down, neither can the direction of the punch, though that was a criteria for meritorious satire recently advocated by cartoonist Gary Trudeau. An LGBT couple denied photography, floral or catering services will undoubtedly perceive the balance of power differently than the Christian business owner bankrupted for expressing religious values that amount in others’ eyes to politically incorrect discrimination.

Which side controls the narrative about campus “rape culture?”

Does Paul Nungesser have more or less power than Emma Sulkowicz?

Are the targets of Charlie Hebdo’s satirical barbs victims, as Trudeau suggests, or are they oppressors, as Ayaan Hirsi Ali and others might argue?

[T]o portray an institution that mocks any religion’s sacred cows as villainously “punching down” ignores that religious institutions are very much part of the power structure and have been throughout history.

When you’re challenging the gods, and those who claim to speak for the gods, you are always punching up.

Can we say with certainty that Charlie Hebdo’s (alleged) punching down in France does not help people like Raif Badawi punch up in Saudi Arabia?

Like shifting sands, our perceptions of the balance of power change from setting to setting, issue to issue, moment to moment, always influenced by the view from our table. If we refrain from swinging except in the clear cut cases, satire is sidelined precisely at those moments when we stand on the brink, when social upheavals make the scores too close to call.

But it is not all.

Circumscribing speech based on the sensibilities of out-groups marginalizes and infantilizes the members of those groups. It treats them as children who must be shielded from the harsh confrontations that members of other, more superior groups might be expected to handle. As David Frum noted in responding to Trudeau:

It’s almost as if he thinks of underdogs as literal dogs. If a dog bites a person who touches its dinner, we don’t blame the dog. The dog can’t help itself. The person should have known better.

In this manner, Trudeau and his cohorts would return fierce debate to the exclusive province of those—white, male and Judeo-Christian—who by dint of their power and privilege can be expected to handle such heady and taxing matters responsibly.

Finally, and here is the crux of it, we cannot make the world safe for the people who would punch up unless we find it our hearts to defend those who will use the same freedom to punch down.

I used to differentiate between government censorship and private consequences for unpopular speech. It was the wrong distinction. The meaningful difference is between non-forceful responses to speech—firing, boycotting, bankrupting, and shunning, all of which are fair game—versus forceful responses, which never, ever are.

It is not functionally different whether the thugs suppressing expression are the official ones we call “government” or a renegade band of religious zealots. If we give in to the latter on the theory that they are somehow exempted from the resistance we would put up against the former, the zealots simply become a shadow government of censors.

We are no less unfree. 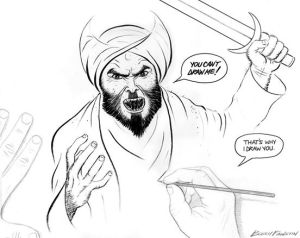 If we want freedom to exist for the Raif Badawis of the world, we must defend its exercise by the Pam Gellars.

The peaceful way to do that, to render violence counterproductive to its own ends, is by mirroring the speech that would be suppressed. Even when it is offensive. Even when it is blasphemous. Even when it is rude, childish, stupid, unpopular, pointless or unnecessarily provocative.

Even when we don’t agree. Especially then.

Sarah Baker
Sarah Baker is a libertarian, attorney and writer. She lives in Montana with her daughter and a house full of pets.
Callimachi, Draw Muhammad, Free Speech Aside, Garland, Pam Gellar