5 Thoughts On Ferguson And Mike Brown 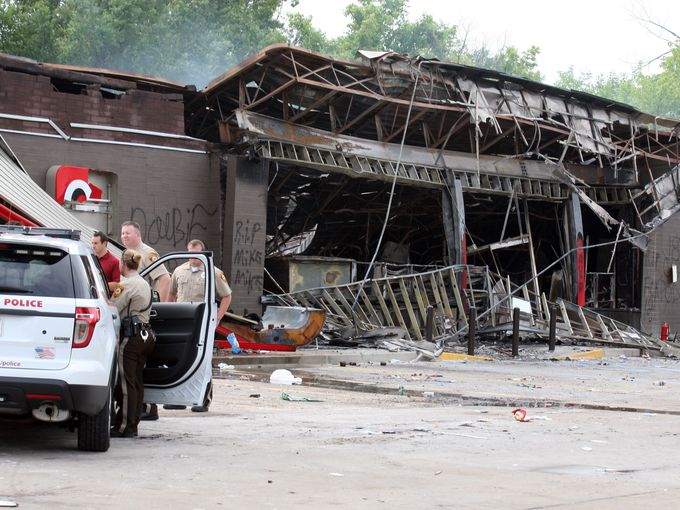 As the country has watched the events unfold in Ferguson over the past week, we have been horrified by the rioting and the wanton destruction of property in the wake of the grand jury’s decision to not indict Ferguson police officer Darren Wilson on criminal charges for the shooting of Michael Brown. Tempers have been flaring as people have taken to social media to argue their side of the case. I’ve been trying to figure out what to write on this and putting together what to say on this. So here we go:

1) The Grand Jury Came To The Right Decision

After looking at the evidence, here’s what we have essentially; some eyewitness testimony that claimed Mike Brown was essentially murdered by Darren Wilson, most of which was proven false; Officer Wilson’s version of events; eyewitnesses that corroborate Wilson’s events; and finally an autopsy and forensic evidence which also corroborate Officer Wilson’s version of events that showed a struggle for his gun and that Brown was shot in the front.

2) Having Said That, There Should’ve Been A Special Prosecutor Appointed In This Case

I agree with Stephen Littau that the outrage here is not that the grand jury was through in the Darren Wilson case, it’s that they indict everyone else. No wonder why many people protesting can see a possible conflict of interest.

If it’s even possible to appoint a special prosecutor, this is such a case. It may have lessoned the charges of impropriety and conflict of interest.

One of the things that has been disturbing in this case is the calls to violence in the media. An anarchist magazine says we need to stop “riot shaming.” An op-ed writer in Time wrote a defense of rioting. A libertarian blogger called the rioting and violence “just and necessary.”

These people and others like them who are supporting the riots are disgusting. There is no excuse for the destruction of private property and businesses. These riots have runied the livilihoods of the employees and business people, most of whom are black. These people didn’t kill Michael Brown.

A brief look around shows that there are non-violent alternatives to pursue change. Civil rights laws were enacted in the 1960s and legislation defending the right to vote was enacted as a part of it. If you want to change the law and how policing is done, get out there organize and vote for candidates who agree with you.

Enough about the riots. Let’s talk about how people have come together in the aftermath. One of the businesses destroyed in the Ferguson riots was a black-owned bakery. They’ve raised $200,000 in donations from a GoFundMe page to enable them to rebuild. The store that Michael Brown allegedly robbed before his encounter with Officer Wilson was also looted. They too have setup a GoFundMe page which has raised almost $25,000 in two days. Please give some money to them.

The people that gave money to these two minority business owners were of all races and creeds. The attempt by many of the Ferguson rioters to start a race war failed miserably.

Other Ferguson businesses have setup GoFundMe pages and in a future post, probably tomorrow, I will feature everyone I can find. Let the best of America outshine the worst of America.

5) Although Mike Brown Is Not The Proper Poster Boy For Corrupt And Racist Policing, We Need To Address Police Brutality

Mike Brown most likely died assualting a police officer and going for his gun. Darren Wilson most likely did nothing wrong when he killed Michael Brown. However, police brutality is a real problem, especially in minority communities.

We need to ask ourselves why African-Americans are so afraid of law enforcement and work together to change it. We also need to end or rein in police militarization and the Federal government does need to get involved to create stricter oversight of local police departments. There will most likely always be police officers who abuse their authority, but right now we have too many on the force. We’re not going to solve this by blocking freeways, annoying Black Friday shoppers, and rioting; we’re only going to solve this by dialogue.

In the end, what we have here is a tragedy all around. An 18 year old young man is dead and regardless of the circumstances, it’s still a tragedy. We have a police officer who had to take that young man’s life. I hope and pray that the family of Michael Brown and Officer Darren Wilson find peace. I pray that the business owners of Ferguson have their shops restored and I pray for peace and more importantly, for understanding and that out of this tragedy, some change that ensures something like this never happens again.

Kevin Boyd
I’m one of the original co-founders of The Liberty Papers all the way back in 2005. Since then, I wound up doing this blogging thing professionally. Now I’m running the site now. You can find my other work at The Hayride.com and Rare. You can also find me over at the R Street Institute.
http://thelibertypapers.org/2005/11/22/a-bit-about-kevin/
Darren Wilson, Ferguson, Mike Brown, police brutality, racial profiling