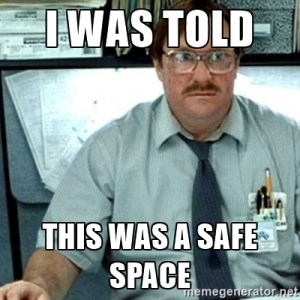 As much as I despise Donald Trump, on some level I understand why he has die hard supporters. The most popular reason for this phenomenon is he seems to be the answer to the political correctness of our time. Trump may be many, many, horrible things, but being politically correct isn’t one of them.

Indeed, political correctness is a significant problem in our culture. Participation trophies, zero tolerance, and the very Orwellian PC language in which the Social Justice Warriors (SJWs) insist we use in our public discourse are doing great harm to the Millennials. The concept of ‘safe spaces’ on college campuses wraps all of the above (and more) in one tidy bow which infantilizes young adults. Not too long ago, college campuses were once considered the place to debate and explore controversial ideas, now have spaces to protect the precious Millennial snowflakes from debate and controversial ideas.

Yes, the SJWs certainly do suck. I’m sure that SJWs who read the above two paragraphs are angry I didn’t include a trigger warning before challenging their world view but here’s the thing: it’s not just SJWs who retreat into safe spaces nor just the generation raised in this very PC culture. As it turns out, some of the very people who are most critical of political correctness, Millennials, and safe spaces don’t want their worldviews challenged either!

I can’t speak for anyone else’s social media feed other than my own but I have seen people leave controversial comments followed by something to the effect of ‘I’m not going to debate this, if you post something that disagrees with me on my wall it will be deleted.’ Or s/he will simply delete the post without explanation (I’ve seen this behavior from conservatives and progressives alike).

Of course, having different opinions and refusing to debate opinions is one thing; being upset that someone shares an inconvenient fact completely destroying the basis of an opinion is another. Around Memorial Day Weekend, someone posted on my FaceBook wall about how awful it was that President Obama went to Hiroshima, Japan on Memorial Day instead of the traditional laying the wreath at the Tomb of the Unknown Soldier. There was just one problem with this person’s complaint: it wasn’t true. All it took to see if this person had a legitimate beef with Obama was a five second Google search (in the age of information, ignorance is a choice). In fact Obama visited Hiroshima on Friday, May 27, 2016 and visited the Tomb of the Unknown Soldier on Monday, May 30, 2016 (AKA Memorial Day).

In response to my posting readily available news articles reporting that Obama attended both of these ceremonies, I received a private message asking me: ‘Why are you always defending Obama?’ I don’t remember my exact response but it would have went something like ‘I’m not always defending Obama but the truth matters.’

The same sort of thing happened when someone blamed Obama for pulling the troops out of Iraq too soon and I dutifully pointed out that Obama was carrying out the troop withdrawal signed by President Bush.

These were just two examples off the top of my head; there are certainly other examples I could have used. As we are getting mercifully closer to the end of the 2016 campaign, conservatives, progressives, and yes, even some libertarians are retreating to their safe spaces refusing to be challenged at all.

The worst offenders IMO are the Trump supporters who are oh so critical of safe spaces on college campuses and Trump himself. The Trumpster divers tell us that all of Bill Clinton’s sexual assault accusers are to be believed while Trump’s accusers are all liars. Why did they all wait to come forward until a month before election day? Surely, they are all either opportunists and/or working directly for Hillary!

This is entirely possible. It’s possible that some if not all of them are lying. It’s also possible that because the world has now been exposed to Trump being Trump, these women now feel like the public will listen when prior to the leak the public otherwise would not.

Then there’s the issue of Trump’s poll numbers. As I look at my FaceBook feed, I see several Trump supporters posting articles from Trump friendly sites claiming that Trump is polling at 67% to Hillary’s 19%. In contrast, Real Clear Politics, averaging the leading scientific polls show Hillary leading Trump 44.7% to 39.4%.

Of course in terms of the election itself, it’s the electoral college map that matters not the popular vote. How are the candidates fairing on the electoral map? The Real Clear Politics Map is showing 262 electoral votes for Clinton, 164 for Trump, and another 112 are considered toss ups. The candidate who receives a minimum of 270 electoral votes becomes the next POTUS. By my math, that means that HRC is within 8 electoral votes of the magic number in this projection. This doesn’t provide much room for error for Mr. Trump. In order for Trump to win based on the above, he would have to win just about every one of the toss up states and not lose a single state projected to be in his column. If he wins all of the toss up states except for Florida, Trump still loses.

Clearly, either Real Clear Politics with its scientific polling or Trump biased Arizona Freedom Alliance will be proven wrong on Election Day, safe spaces be damned. One would think that but with Trump openly saying he won’t necessarily accept the election results (whatever that means!), he and his supporters will remain in their safe spaces for a bit longer.

It’s not too difficult to see how damaging the safe space phenomenon will be to our culture. Verifiable facts are ignored while rumors and provable falsehoods are considered truth when it aligns with an agenda.

As a people, we need to realize that being skeptical isn’t a bad thing. We must be careful of confirmation bias. We should read articles we disagree with and have friends we can argue important issues with (and remain friends at the end of the day).

And if you want to take a short break in your safe space (we all do, don’t kid yourself), then do so. Just don’t make it your permanent address. One can deny reality but cannot escape its consequences.

How Critics of #GamerGate Are Silencing the Voices of Women 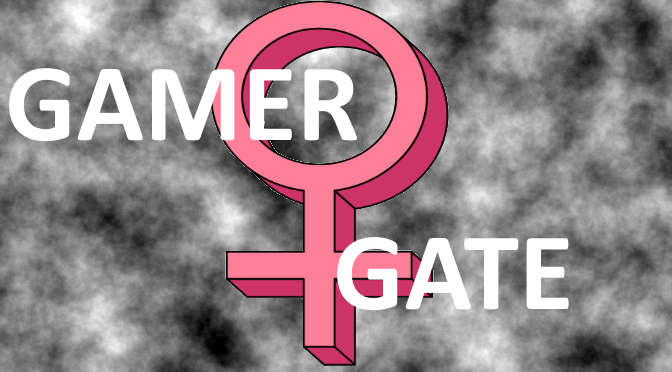 Either #GamerGate is about ethics in journalism or it is about harassing women. Thus proclaims Taylor Wofford in a recent article for Newsweek. Operating under this presumed dichotomy, Newsweek surveys the tweets and finds that:

[U]sers tweeting the hashtag #GamerGate direct negative tweets at critics of the gaming world more than they do at the journalists whose coverage they supposedly want scrutinized.

In Wofford’s mind, “direct[ing] negative tweets at critics of the gaming world” necessarily equates with “harassing women.” This erroneous equation arbitrarily homogenizes women, assumes that agreement with social justice critiques of the gaming world are an essential element of being female, and silences the voices of all women who disagree with those criticisms.

What Wofford and so many others fail to recognize is the existence of Secret Third Option C: #GamerGate is not about journalistic integrity or about harassing women, but is a backlash against social justice fascism. In a wonderful article, I encourage everyone to read, Cathy Young, writing for Reason summed it up as follows:

This is an anti-authoritarian rebellion, not an antiwoman backlash.

Yet Wofford and his ilk do not even recognize this as a possible motivation. Or perhaps they do, but treat it as the equivalent of “harassing women,” an assumption that only works if one presumes all women march lockstep with the likes of Anita Sarkeesian.

I don’t have a problem with violence against fictitious women as props in video games. I don’t have a problem with fictional women being sexualized as background scenery in video games. If I did have a problem, I just wouldn’t buy the games (or, since I am not a gamer, the books and movies). I think other people should be free to buy what appeals to them. If they like space, then they might want to play one of These games, for example. If they like horror, there are plenty of games out there for all their zombie-killing needs. If they want to play games with background violence and sexualization of female characters that don’t even actually exist in the real world, then they should play those games. I do not think that because women are capable of other roles, they must never be portrayed as damsels-in-distress. I do not think that portraying women (or men) as objects of sexual desire implies they lack other value.

What does rub me the wrong way are people who want to sanitize the world, who want to dictate how we are allowed to interact with each other, and what sort of fantasy lives we are permitted to augment with fictional books, movies and video games; who want to remove all the darker fringes and seedy nooks from our mental landscapes and herd us all into a more civilized and domesticated imaginative realm; where every fictional woman must be treated as representative of all real women and heresies against the enlightened orthodoxy are not permitted.

When critics deny these alternative motivations exist, or insist that they necessarily equate with misogyny, they are in effect silencing my voice and the voices of all women who feel as I do. When the critics insist that hatred of one woman or one group of women equates with hatred of all women generally, they treat us as a homogenous class without distinction or individuality.

They should know better.

Sarah Baker
Sarah Baker is a libertarian, attorney and writer. She lives in Montana with her daughter and a house full of pets.
anita sarkeesian, gamergate, Misogyny, Social Justice Warriors