A Lesser of Evils: Why Ted Cruz Cannot Be My Anti-Trump 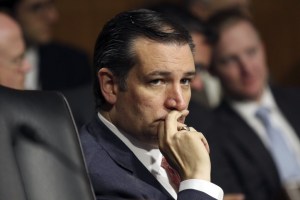 I’ve never been a lesser-of-evils sort of voter. It’s too cynical and depressing an approach to life. Anyway I rarely think one of the major party candidates is “better” in some meaningful sense than the other.

This election is different. I cannot shake a nagging unease that one candidate must be avoided, perhaps with a vote for any marginally lesser evil capable of stopping him, however distasteful.

That candidate is Ted Cruz.

Probably many or even most of the other candidates share this shortcoming. What sets Cruz apart is his more sophisticated ability to appoint Supreme Court justices who share his views, as he has vowed to do.

Under that specter, liberty-leaning voters should ask for clarity and reassurance from the Cruz campaign on the following issues before casting a vote in his support.

Does Ted Cruz Want to Limit the Power of Judicial Review? In 1803, the Supreme Court decided Marbury v. Madison. Since that time, the Court has exercised three powers:

That’s it. Under the first, the Court delineates areas of individual liberty into which no political majority may intrude. Under the second and third, it enforces the acts of other branches of government. Under none of the three does the Court “make law.”

Liberty voters should therefore ask what Ted Cruz is gunning for when he says things like:

I think we can rule out number two; he’s not complaining about acts of the political branches. His rhetoric, to the contrary, suggests that he wants political majorities unfettered by such inconveniences as meddling Supreme Court justices.

He could be taking aim at number three, in which case it is not the laws he dislikes, but the doctrine of Equal Protection. Either way, the Court is not responsible for having enacted the laws that are subject to that doctrine. The political branches are.

It sure sounds like it is the first option Cruz is targeting. He does not like the Court delineating areas of individual liberty beyond the reach of political majorities.

That is a deeply authoritarian approach to government. Unless and until Cruz repudiates it convincingly, he cannot be my “not-Trump.”

Does Ted Cruz Believe in Unenumerated Rights and Substantive Due Process? Under the view of many libertarians, the Constitution enumerates the powers of government, but not the rights of individuals. The former are few, narrow and circumscribed. The latter are many, broad and transcendent.

This is the view held by Rand Paul and other libertarian constitutionalists from organizations like Reason Magazine, the Cato Institute, the Foundation for Economic Education, and the Institute for Justice.

It is also my view.

One textual source for this approach is the Fourteenth Amendment to the Constitution, which prohibits political majorities at the state and local levels from depriving individuals of the privileges and immunities of citizenship, of equal protection of laws, or of liberty without due process.

The “liberty” thusly protected has been interpreted to include economic endeavors as well as other peaceful activities integral to enjoyment of life and the pursuit of happiness. The concept that such freedoms are Constitutionally protected, even though not expressly mentioned, is sometimes referred to as the doctrine of “substantive due process.”

There are competing schools of thought. One is that only individual rights expressly enumerated in the Constitution are beyond the reach of political majorities. Under this view, the Fourteenth Amendment was adopted to prohibit racial discrimination, not to proscribe state infringement of unenumerated rights.

That is the view expressed by Ted Cruz at a hearing he conducted before the Senate Judiciary Committee exploring ways to “rein in” the Supreme Court. Cruz’s comments at the hearing suggest, on deeply personal issues from marriage to economic rights, he prefers “the Supreme Court defer to state legislative decisions rather than uphold individual rights.”

This is as unlibertarian a position as a candidate could hold. Saving the GOP from a Trump loss to Hillary Clinton is not a reason to support a nominee committed to undermining individual liberty in favor of majority rule.

Is Cruz Committed to Individual Rights? Or States Rights? Ted Cruz’s passion is not the fundamental liberty of individuals, arguably enshrined in the Fourteenth Amendment. It is, rather, the power of state legislatures found in the Tenth.

He’s “a Tenth Amendment guy,” according to his wife. Indeed he once headed the Texas Public Policy Foundation’s Center for Tenth Amendment Studies. When Ted Cruz talks about limited government, he is talking about limiting federal government. His concern is federal versus state, not individual versus collective.

Then too, even on that more beloved Constitutional provision, Cruz is willing to stray if it means more power for the right kind of majorities. He was in favor of the federal government defining marriage before he was against it. He likes states’ rights when they ban same-sex marriage, but not as much when they decriminalize marijuana.

He might be a federalist, for those who don’t mind states’ rights served squishy. But he’s no libertarian.

How Far Will Ted Cruz Go to Bend the Judiciary to His Interpretation of the Constitution? Despite the “sour fruit” of John Roberts’ decisions in NFIB v. Sebelius and King v. Burwell, conservatives continue their misguided pursuit of a “deferential” judiciary. In their statist hearts, they would rather accept the big government of Obamacare than lose the power to regulate social order.

If NFIB v. Sebelius is the price of winning the next Obergefell v. Hodges, it is one they will pay.

This is not a trade-off liberty lovers should make.

Yet Ted Cruz wants to subject the Supreme Court to term limits and retention elections. As the Institute for Justice’s Evan Bernick wrote in the wake of Cruz’s SCOTUS hearing:

…[I]t is Cruz who strayed from the text and history of the Constitution, both in his histrionic criticism of Obergefell and his suggestion that the cure for America’s constitutional ills is an even more inert judiciary.

Cruz’s most fundamental error lay in the premise of the hearing itself: The most pressing threat to constitutionally limited government today is not “judicial activism” but reflexive judicial deference to the political branches.

We can have a judiciary that reflexively defers to the political branches or we can have constitutionally limited government — but we cannot have both.

Liberty voters must consider whether they want Supreme Court appointees to facilitate the powers of political majorities or to protect individual rights from the overreach of such exercise. Ted Cruz appears to be on the wrong side of that choice.

Until he convinces me otherwise, that puts him on the wrong side of mine.

Sarah Baker
Sarah Baker is a libertarian, attorney and writer. She lives in Montana with her daughter and a house full of pets.
fourteenth amendment, judicial review, substantive due process, Ted Cruz, unenumerated rights