There’s a Facebook post that has gone viral of a Georgia woman, who is Muslim, essentially blasting her fellow Muslims for demanding a special increase in food stamp benefits to offset the higher cost of halal food. One of this young lady’s followers screen capped the image, drew a line through her name and eyes to protect her privacy and posted it in Imgur. 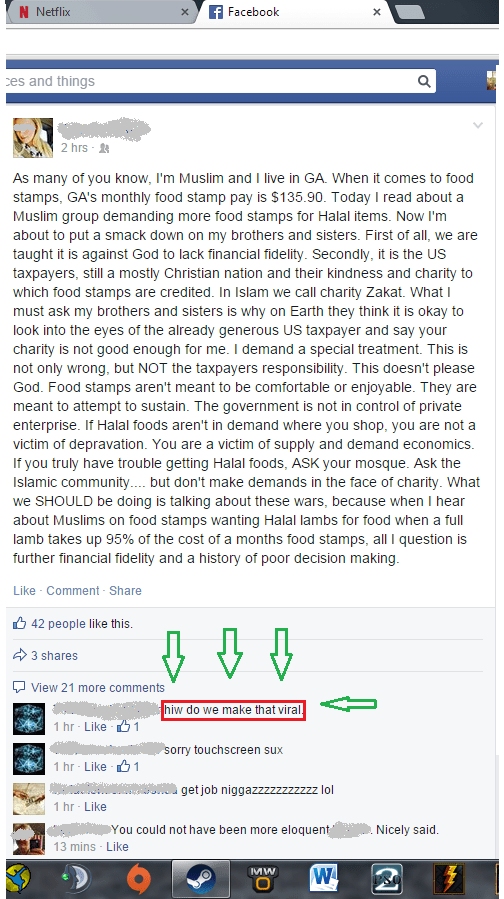 I know the young lady who wrote this post. She’s a Bosnian immigrant who came to America with her family to escape the Bosnian Civil War of the 1990s. She grew up in the U.S. and became a political activist who lives outside of Atlanta. I have the privilege of knowing her and I am proud to call her a friend.

All members of religious groups (and those who don’t belong to or believe in any religion for that matter) are entitled to is to practice their religious beliefs in peace, as long as they do not harm others. This applies whether your religion is the majority religion in the country or has very few adherents.

The worst example of this is Mike Huckabee or as we like to call him around here, “Tax Hike Mike.” Tax Hike Mike believes that God wants him to do everything from support Common Core, to fight global warming, to oppose same sex marriage. Essentially, Tax Hike Mike wants special, religious based privileges for himself and his followers above and beyond the protection of the freedom of religion.

Christians are called to fight poverty by giving to the poor, not to have Caesar redistribute the wealth of your neighbors to fight poverty. Christians are called to demonstrate their faith by living by example, not to have Caesar pass laws to mandate how their neighbors live. Christ instructed us to fufill the Great Commission by bringing the Gospels to the four corners of the world, not give that duty to Caesar. American Christians, on both the right and the left, need to stop outsourcing their own duties as Christians to the government.

The day may come that Christianity will not be the majority religion in the United States. It wouldn’t be unparalleled in world history for a nation to change its religious beliefs over a generation or so. One day, Christians even in America may find themselves at the mercy of a government determined to promote its own views that maybe contradictory to Christianity. It’s an experience many Christians around the world already experience daily.

I believe that freedom and virtue go hand in hand and reinforce each other. Sometimes, we Christians need to be mindful of the “freedom” part. After all salvation itself is a gift from God through his son Jesus that must be freely accepted.

Kevin Boyd
I’m one of the original co-founders of The Liberty Papers all the way back in 2005. Since then, I wound up doing this blogging thing professionally. Now I’m running the site now. You can find my other work at The Hayride.com and Rare. You can also find me over at the R Street Institute.
http://thelibertypapers.org/2005/11/22/a-bit-about-kevin/
American Christians, food stamps, Muslims, Tax Hike Mike

Former Arkansas Governor “Tax Hike Mike” Huckabee was a guest on the American Family Association’s “Today’s Issues” program where he ripped into the Supreme Court’s decision this week to not hear gay marriage cases, which essentially increased the number of states in which gay marriage became legal to 30 plus the District of Columbia.

Here’s a video of Tax Hike Mike threatening to leave the GOP over gay marriage:

For those of you who prefer to not watch the Huckster, Rare has transcribed what he said:

“If the Republicans want to lose guys like me and a whole bunch of still God-fearing Bible-believing people, go ahead and just abdicate on this issue,” Huckabee said.

“And go ahead and say abortion doesn’t matter, either, because at that point, you lose me, I’m gone, I’ll become an independent, I’ll start finding people that have guts to stand. I’m tired of this,” he said.

Beyond being a generational issue, young Republicans say their positions stem from the party’s belief that government shouldn’t intrude on people’s lives. Ron Paul’s 2012 presidential campaign got most of its following from younger Republicans attracted by his libertarian message that allowed for gay marriage and the legalization of marijuana.

It’s not just Tax Hike Mike’s increasingly out of date positions on social issues that should stop anyone who loves liberty from shedding tears over his departure from the GOP, it’s his terrible positions on just about everything. Here’s a brief summary:

For more goodies about Tax Hike Mike, please visit this blog that has compiled a list of the numerous times Mike Huckabee has supported big government.

After the disaster that was the presidency of George W. Bush and “big-government conservatism”, the last thing the Republican Party and the country needs is for that banner to be carried to victory in an election. It’s time to show Tax Hike Mike and those who support the big government nanny state the left does, except their own version of it, the door.

Kevin Boyd
I’m one of the original co-founders of The Liberty Papers all the way back in 2005. Since then, I wound up doing this blogging thing professionally. Now I’m running the site now. You can find my other work at The Hayride.com and Rare. You can also find me over at the R Street Institute.
http://thelibertypapers.org/2005/11/22/a-bit-about-kevin/
big government conservative, gay marriage, nanny statist, Tax Hike Mike