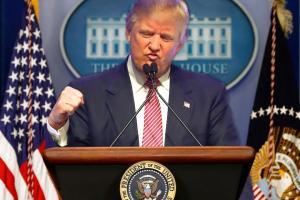 I DID Call the Police. Here’s How It Worked Out For Me.

Over the past 24 hours I have been surrounded in person, online and over media by people announcing they don’t believe the Trump accusers (or the Clinton accusers) because they didn’t call the police at the time of their alleged incidents. I need to get this off my chest. The thing Trump joked about. Well that exact thing happened to me. I did call the police and here is how it worked out for me:

I was a 19-year-old college student in Missoula, Montana. My friends and I went to see Quiet Riot in a bar. It struck us as funny, somehow.

At some point, I was separated from my friends. I went to the bathroom or to get a drink or something, I don’t recall. As I was pushing through the crowd to get back to my friends, that’s when it happened. The exact thing Trump says he can do to women.

Now, a word here about what I was wearing.

Not because it’s relevant to me “deserving it.” But it is relevant to how easy it was to get inside my clothes.

I was wearing a white peasant skirt. Above the knees but not by that much. Loose and billowy. My underwear were white and satiny. Not at all skimpy. Full coverage and loose fitting. I have no memory of my top or my shoes or how I wore my hair that night. I recall the details of the skirt and underwear clearly.

Because they were loose-fitting and that made it easy.

I was pushing through the crowd to get back to my friends. The bodies were packed tightly together and it was slow going. All of a sudden someone’s hand was moving up under my skirt, into my underwear, into me.

It was such a complete shock. One minute I was just walking through a crowd and the next a stranger’s finger was inside my body. I looked over my shoulder and found myself looking into the eyes of the finger’s owner.

The look on his face is something I will never get over.

It said that he knew it was a violation, that he didn’t care because I deserved it, and that there was nothing I could do about it.

He was still inside me at that point.

I can only say that in the moment, a lot of things conspired against it. Part of it was the shock. Part of it was the look on his face. In it was something I had never confronted before, never contemplated, never even really knew existed. And it intimidated me. Part of it was simply the tight space. There was literally no room to fight. Our bodies were packed so closely together. The only people paying attention were the ones packed around me and they all had the same smirk on their faces he did.

In that moment, my instinct was only to get away. I pulled away from him, pushed on through the crowd and made it back to my friends. I was breathing strangely and talking choppily. I told people what had happened. Those people told other people. Everyone thought I should call the police.

Of course, I thought, as thought returned. That’s what you do. If you don’t, then he can do it to someone else. You’re supposed to stop him.

One of my friends talked to the owner of the bar. He talked to me and then he called the police (this was before cell phones).

Several police cars came. A bunch of cops shut down the concert, shut down the bar, and made everyone in there file out past me in the hopes I could identify the guy. I never saw him in that line of faces. He must have left before the cops got there or maybe he went out a back door. I saw lots of other things. Curiosity. Amusement. Sympathy. Encouragement. Disbelief. Annoyance. Disgust. Condemnation. I saw what it looks like when a face says the word “whore.”

Some of you are probably thinking, well yeah, you shouldn’t have even been there and you could have gotten that bar owner in a lot of trouble and you probably cost him a lot of money. I don’t blame you for thinking those thoughts. I don’t think it makes you a bad person. How could I, when I have thought them too?

Those thoughts are why some victims don’t call the police.

I never found out who the finger guy was. Just some random stranger who put himself inside me and then went on his merry way. Maybe we have passed each other on the street and I never knew because it was a long time ago and I was drunk.

It’s weird because our culture seems most comfortable with two models for women in the wake of assault.

In one, the one you see most often in fiction, the woman stops having consensual sex, gets nervous and jumpy around men, is scared to go places, and cries all the time. In the other, her lack of evident distress renders her story unbelievable.

I can imagine many reasons victims don’t call the police. Belonging to a familial, social, or religious culture in which victims are perceived as damaged, for example. Fear of losing a spouse or significant other. Fear of having a consensual sexual history divulged. Fear of being perceived as one of those troublesome women who cause too much drama. Fear of professional repercussions.

Of all the possibilities, I can only speak of one from experience. Maybe they feel like they’re acting too normal for anyone to believe the words they would need to speak.

Because sometimes there are no marks on your body and no obvious ones on your soul and you’re a little bit in shock and the façade of normalcy you’re wearing makes you think they won’t believe you. And having to look into all those judging faces as you tell the thing that happened, the thing you yourself sort of agree can’t be that important or it would have left deeper marks – you know that part would leave marks, so maybe you should just cut your losses.

Because I was fine.

The feeling of that strange finger inside of me would return viscerally at the oddest moments, though. For the first year, it happened a lot. Then I thought of it less often. Now the memory of that finger has lost its sharpness.

Not the look on his face though. That part will never fade.

I never thought my clothes were inviting. Even if I had, I still wouldn’t have judged myself for wearing them. Nor for being 19 and in a bar. Nor for being drunk.

I judged myself for not fighting back. That part bothered me even more than the look or the finger. Because I’m only responsible for me. And I just stood there and took it and did NOTHING to wipe that smirk off his face.

It’s been 25 years and I just cried when I typed those words.

If someone were to do the same thing to me again now, I like to think I would fight back this time. I guess you never know until it happens.

I’m not sure I would call the police.

Sarah Baker
Sarah Baker is a libertarian, attorney and writer. She lives in Montana with her daughter and a house full of pets.
Clinton, Trump, Trump Tape